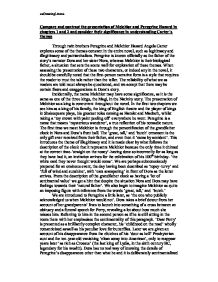 Compare and contrast the presentation of Melchior and Peregrine Hazard in chapters 1 and 2 and consider their significance in understanding Carter's themes Through twin brothers Peregrine and Melchior Hazard Angela Carter explores some of the themes constant in the entire novel, such as legitimacy and illegitimacy and patriarchalism. Peregrine is known officially as the father of the story's narrator Dora and her sister Nora, whereas Melchior is their biological father, a situation that sets the scene well for exploration of these themes. When assessing the presentation of these two characters, or indeed any in the novel, it should be carefully noted that the first-person narrative form is a style that requires the reader to trust the tale rather than the teller. The reliability of what we as readers are told must always be questioned, and we accept that there may be certain flaws and exaggerations in Dora's story. Incidentally, the name Melchior may have some significance, as it is the same as one of the three kings, the Magi, in the Nativity story. The presentation of Melchior as a king is concurrent throughout the novel. ...read more.

Referring to him in the second person as if he is still sitting in the room there with her emphasises the sentimentality of this paragraph. 'Dear Perry' is presented as a brilliantly complex character, his 'childhood on the road' wholly romanticized aswell as his peculiar love for butterflies. Later we are given an account of his disappearance from the clutches of his 'dour as hell' Presbyterian aunt and the ten-year-old vanishing 'clean away into American', only to reappear years later 'as rich as Croesus' (the last king of Lydia, in the sixth century BC, legendary for his wealth). Dora has no real way of knowing the details of Peregrine's disappearance other than what he and it is deliberately sentimentalized in an attempt to portray him in the best light possible, as is the first direct description of Melchior. There is something terribly romantic about the idea of a 'desperate, ravenous' Melchior aged ten pacing around his room dreaming of making something of himself, pretending the sound the sycamores made in the wind was applause. The fantasia-like stream of consciousness comes to an abrupt halt when her thoughts trail off onto the more sinister idea that he may once have ...read more.

Dora tells us about the day Peregrine took the family to Brighton. The jolly abruptness of his appearances and disappearances is a larger than life quality that pervades the memorable day out on the coast. It begins appropriately with magic and illusion, but ends with reality and disillusion for the twins, Dora saying 'we went from the ridiculous to the sublime and our hearts broke as well'. By the end of the first two chapters we have seen two characters whom, as twins, we might expect to be fairly similarly presented, done so completely differently. Whilst both have been romanticized on numerous occasions so far, Peregrine seems more likeable. He is presented as a larger than life character who epitomizes the carnivalesque- grand entrances and exits and a chaotic, on the road lifestyle. He cared for the twins during their childhood, showering them with gifts from around the world. Melchior, on the other hand, is rather shadier, frequently upstaged by his brother. His rejection of his daughters should not be taken on face value, however. We should question why he has done so, having already heard a lot about his painful childhood, and hope to uncover the real reasons out in the remaining chapters. Ryan Corcoran ...read more.