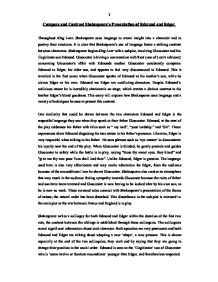 Compare and Contrast Shakespeare's Presentation of Edmund and Edgar Throughout King Lear, Shakespeare uses language to create insight into a character and to portray their emotions. It is clear that Shakespeare's use of language forms a striking contrast between characters. Shakespeare begins King Lear with a subplot, involving Gloucester and his illegitimate son Edmund. Gloucester is having a conversation with Kent (one of Lear's advisors) concerning Gloucester's affair with Edmunds mother. Gloucester consistently compares Edmund to Edgar, his elder son, and appears to feel very disconnected to Edmund. This is revealed in the first scene when Gloucester speaks of Edmund as his mother's son, while he claims Edgar as his own. Edmund are Edgar are conflicting characters. Despite Edmund's malicious nature he is incredibly charismatic on stage, which creates a distinct contrast to his brother Edgar's bland goodness. This essay will explore how Shakespeare uses language and a variety of techniques he uses to present this contrast. One similarity that could be drawn between the two characters Edmund and Edgar is the respectful language they use when they speak to their father Gloucester. ...read more.

Here Edmund stands alone on stage when thinking about how he is going to deceive his innocent brother. Shakespeare may have chosen to stand Edmund alone in his resentment towards Edgar just as Edmund feels he stands alone in his 'baseness', he feels nobody understands how inferior he feels. A further contrast between the two brothers is that while here Edmund stands ands feels alone, Edgar scarcely stands alone. When Edgar adopts his new persona as 'poor Tom' he is shortly joined by other demoralized characters such as Lear who immediately warms to his base character 'Noble philosopher, your company.' Gloucester choice to banish Edgar is a rash decision, which parallels to Lear's sudden decision to banish Cordelia and Kent. Both Lear and Gloucester overlook the child that loves them most. The audience might feel sympathy for Edgar as he has been put in a situation that he believes is real whereas Edmund and the audience know that this is not so. On the other hand the audience may feel frustrated by how much Edgar trusts his brother when they know what he really believes and the true nature of his character. ...read more.

However later the wheel 'turns' from Edmund when Edgar returns and Edgar 'hast this fortune on' him. In conclusion, Shakespeare primarily focuses on creating contrasts between Edgar and Edmund opposed to similarities between the two characters. However one striking similarity does arise. Shakespeare chose to names the brothers Edgar and Edmund; the names are very alike, which is unexpected when their characters differ so greatly. This may be Shakespeare's way of explaining how difficult it is to distinguish between good and evil. The most important contrast he presents is how the two characters represent good or evil. In performance, the colours each of the characters wear reveal the distinct contrast between Edmund and Edgar. This is specifically shown in the battle between the two brothers at the end of the play. Edgar wears white to suggest innocence and goodness and Edmund wears dark colours, which represent evil and sin. The colours symbolise their mental attitudes and personalities. Edmund is presented as a cold malevolent character while Edmund is shown as a trustworthy and loyal who is devastated by losing his family and livelihood. However, it is Edgar who represents morality and is one of the few characters who survives the play, in consequence, presenting the legendary moral that good will always defeat evil. ...read more.