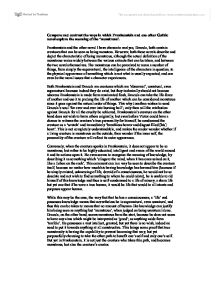 Compare and contrast the ways in which Frankenstein and one other Gothic novel explore the meaning of the 'monstrous'.

Compare and contrast the ways in which Frankenstein and one other Gothic novel explore the meaning of the 'monstrous'. Frankenstein and the other novel I have chosen to analyse, Dracula, both contain creatures that can be seen as being monsters. However, both these novels describe and depict the characteristic of being monstrous, although the actual definition of the monstrous varies widely between the various extracts that can be taken, and between the two novels themselves. The monstrous can be perceived to mean a number of things, from simply the supernatural, the intelligence of the characters in question, to the physical appearance of something which is not what is usually expected, and can even be the moral issues that a character experiences. Both Frankenstein and Dracula are creatures which are 'abnormal', unnatural, even supernatural because indeed they do exist, but they technically should not because whereas Frankenstein is made from reanimated flesh, Dracula can take the life-force of another and use it to prolong the life of another which can be considered monstrous since it goes against the natural order of things. This why Jonathan wishes to send Dracula's soul 'for ever and ever into burning hell'; only then will the retribution against Dracula for all the cruelty be achieved. ...read more.

He recognises what he thinks is the 'monstrousness' in the creature, and even describes it as a 'monster' which 'gnashes its teeth'. This depersonalises the creature, and using emotive vocabulary tries to get the reader to agree with his perception, but yet Shelley at the same time is showing how quickly someone ordinary can become monstrous. After all, Victor has gone against the laws of nature, has gone against his 'child' and is even denying his creature its one desire to 'find a wife for his bosom' which as a request is not so monstrous. This conveys the fact that it is not merely the physical appearance of something that automatically categorises it as 'monstrous', but also whether or not they are natural, and their intelligence. However, in both of the two novels, the respective authors do seem to place a fair amount of emphasis on the physical appearance of the two creatures. Whether this is entirely fair is uncertain, because Victor can be seen as monstrous, and Renfield certainly is to some extent, with his wish to have life regardless of the source from whence it came: 'Life is all I want'. ...read more.

But of course the reaction to deeds done speak loudest of all, and by this, the creature can truly be seen as monstrous, because there is no regret, but even 'exultation and hellish triumph'. Morals, either the existence or non-existence of them, can be seen to be what truly define a being, and so since neither of the unnatural beings show much or any remorse, they can be said to be monstrous. The 'monstrous' attribute is determined by many things, such as morals, intelligence (and of course how this intelligence is used), whether something is of a 'natural' birth, and of course physical appearance. Both the novels mention all of these traits, in differing amounts, to show how the 'monstrous' is integral to not only a mere Gothic horror story, but also life in general. It is not purely the appearance of something which determines whether they are monstrous, and not even whether they are normal or not; the true answer lies deep within the soul, where only that being alone can ever truly know if they are monstrous or not. Intelligence may play a part in having a consciousness, but after that, it depends on that being and their willingness to change to become a normal member of society, and one that respects the unwritten laws by which we all live. ?? ?? ?? ?? ...read more.