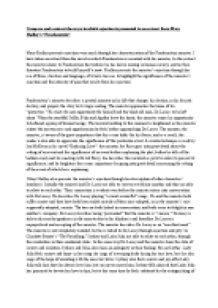 Compare and Contrast the ways in which rejection is presented in Mary Shelley's &quot;Frankenstein&quot;

﻿Compare and contrast the ways in which rejection is presented in an extract from Mary Shelley?s ?Frankenstein? Mary Shelley presents rejection very much through her characterisation of the Frankenstein monster. I have taken an extract from the novel in which Frankenstein is reunited with his monster. In this extract the monster relates to Frankenstein the troubles he has had in mixing in human society, and he then threatens Frankenstein to build himself a mate. Shelley presents the monster?s rejection through her use of form, structure and language, of which she uses to highlight the significance of the monster?s rejection and the intensity of pain that results from his rejection. Frankenstein?s monster describes a pivotal moment in his life that changes his destiny, or his desired destiny, and propels the story to its tragic ending. The monster approaches the home of his ?protectors.? He waits for any opportunity for himself and the blind old man, De Lacey, to be left alone. When the youthful Salfie, Felix and Agatha leave the home, the monster seizes his opportunity to befriend a group of human beings. The tension building to this moment is heightened as the monster relates the nervousness and apprehension he feels before approaching De Lacey. ...read more.

There is a great deal of contrast between the monster?s appearance and the monster?s emotional state. Similarly in Jane Austen?s ?Pride and Prejudice,? Darcy?s unwelcoming appearance contrasts with his inner goodness. His varying manner is also presented through the different reaction other characters have towards his character. His house keeper is able to observe the inner goodness he has harboured since childhood, but Elizabeth can only, initially perceive the pride and self - importance in his appearance. He is lonely and seeks sympathy and relationship from those who he feels rejected him. His appearance is grotesque and repulsive as opposed to his motive to seek out company rather than repel it. The monster finds himself very much in conflict with his own nature. His body stops him from obtaining the company he desires so much. It comes as no surprise that the monster goes on to despise his form. When sighting himself in the reflection of water, he is appalled. Then later on he goes on to question his existence: ?why did I live?? His language changes also, he continually refers to himself with shame and disgust; he compares himself to the devil. He states that he has been ?degraded? and continually refers to himself as a ?fiend.? On finding three works of literature Frankenstein?s monster educated himself and he was able to find links between his life and the lives of the characters presented in the pieces that he found. ...read more.

Frankenstein, however, still manages to observe sincerity in his monster?s pleas for a companion. Frankenstein states that he began to become ?compassionated? towards the monster, through his retelling of the misery he suffers in loneliness. Through the sympathetic reaction of Frankenstein and De Lacey- characters that have had the opportunity to converse with the monster- the reader is also encouraged to sympathise with the monster, for characters around him also pity him. In conclusion the pain and loneliness the monster feels in rejection, is presented through the reactions of other characters towards him, the descriptions of feelings in his own narration, and through the presentation of characters that are in a similar situation to the monster. The aggressive reaction of Felix is a physical reflection of the emotional pain that is inflicted on the monster following his rejection. The monster goes on to despise himself through his use of abusive terms in which describes his form. In the monster?s narration, he is very much focused on drawing pity from the reader as he shows through his description of the different reactions characters have towards him, and through his sophisticated language that contrasts with beastliness that people perceive in sighting him. However, Victor Frankenstein?s narration highlights the violence in the monster?s character, leaving the reader quite rightly feeling ambiguous about the monsters capacity for sincerity and violence. ...read more.