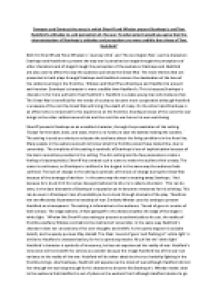 Compare and Contrast the ways in which Sherriff and Whelan present Stanhopes and Tom Hackfords attitudes to and perception of the war.

ï»¿Compare and Contrast the ways in which Sherriff and Whelan present Stanhope’s and Tom Hackford’s attitudes to, and perception of, the war. To what extent would you agree that the characterization of Stanhope’s attitudes and perception are more credible than those of Tom Hackford? Both R.C Sherriff and Peter Whelan in `Journey’s End` and `The Accrington Pals` use the characters Stanhope and Hackford to present the way war is perceived on stage through the perceptions of other characters and of stage through the perception of the audience. Stanhope and Hackford are also used to affect the way the audience perceives the Great War. The main themes that are presented in both plays through Stanhope and Hackford concern the devaluation of the lives of the soldiers serving in the frontline. Whelan and Sherriff use Stanhope and Hackford to present anti-heroism. Stanhope’s character is more credible than Hackford’s. This is because Stanhope’s character is far more authentic than Hackford’s. Hackford is a naïve young man who believes that The Great War is beneficial for the needs of society to become more cooperative although Hackford is unaware of the cost the Great War will bring; the death of many. On the other hand Stanhope is an officer who is renowned for his experience on the frontline. ...read more.

`We all feel like you do sometimes, if you only knew. I hate and loathe it all. ` Stanhope shows his conscience because he can sympathize with those who cannot cope with the difficulties war brings for example the character Hibbert. Stanhope can understand living in this war can be emotionally strenuous because he himself has experienced the strain that this war brings. Stanhope?s understanding makes his argument more credible because he is able to support his claim as he himself has had years of service in the frontline. His argument is made more credible because other characters around him share the same perspective. On the other hand Hackford, because of his expressive character, is able to deliver with confidence, his positive perspective concerning the war although Hackford lacks the experience to support his beliefs; as a result his argument suffers. `It?s a free exchange of skills? of produce of hands or brains. That?s what?s needed. Not money. `Hackford use of short sentencing creates a sense of confidence and clear understanding which strengthens his argument. Hackford believes that there is no use in money. He believes the free exchange of skills will create a society that is more cooperative rather than a society that is autonomous. `They can?t see further than they know. ...read more.

They have to bring everything down to the particular. If you try to explain the theory of free exchange of skills they think you?re talking Chinese. ` Hackford mocks the social system put in place in Britain. Hackford is displeased because of social restrictions that do not allow society to cooperate towards a common cause. Hackford believes that the war will create the opportunity for society to come together for a common cause. Hackford?s prediction is true because of the idea of total war; the home front aided the war effort, for example women working in munitions factories. Hackford believes that the warfront is the only place that will satisfy his need for `free exchange. ` In conclusion Stanhope and Hackford are used to criticize the war. Stanhope is the more credible than Hackford?s because his arguments are typical of the perspective shared by post war writers. Stanhope is also more credible because of the experience that he has compared to the little experience Hackford has. Hackford?s perspective will be most definitely different if he too had experienced war as much as Stanhope. Hackford is used to present the perception of the young hopeful generation that were excited by the idea of going to war. Hackford presents the perceptions of typical of pre-war Britain. Whereas Stanhope is representative of the soldiers who have experienced the war and have become aware of the damage the Great War has inflicted. Stanhope exhibits perceptions that are typical of post war Britain. ...read more.