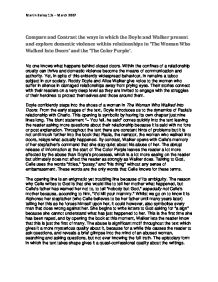 Compare and Contrast the ways in which the Doyle and Walker present and explore domestic violence within relationships in 'The Woman Who Walked Into Doors' and the 'The Color Purple'.

Compare and Contrast the ways in which the Doyle and Walker present and explore domestic violence within relationships in 'The Woman Who Walked Into Doors' and the 'The Color Purple'. No one knows what happens behind closed doors. Within the confines of a relationship cruelty can thrive and domestic violence become the means of communication and authority. Yet, in spite of this evidently widespread behaviour, in remains a taboo subject in our society. Roddy Doyle and Alice Walker give voice to the women who suffer in silence in damaged relationships away from prying eyes. Their stories connect with their readers on a very deep level as they are invited to engage with the struggles of their heroines to protect themselves and those around them. Doyle confidently steps into the shoes of a woman in The Woman Who Walked Into Doors. From the early stages of the text, Doyle introduces us to the dynamics of Paula's relationship with Charlo. This opening is symbolic by having its own chapter just nine lines long. The blunt statement "- You fell, he said" comes quickly into the text leaving the reader asking more questions about their relationship because it is said with no fore or post explanation. Throughout the text there are constant hints of problems but it is not until much further into the book that Paula, the narrator, the woman who walked into doors, relays what actually happened. By contrast, Walker opens with Celie's memory of her stepfather's command that she stay quiet about his abuse of her. The abrupt release of information at the start of The Color Purple leaves the reader a lot more affected by the abuse than Doyle's processes, which is a lot more easing on the reader but ultimately does not affect the reader as strongly as Walker does. Talking to God, Celie uses the words "titties," "pussy," and "his thing" without any sense of embarrassment. ...read more.

The Woman Who Walked Into Doors is set in a very different time but similar culture to The Color Purple. The Woman is set in the centre of the Republic of Ireland focused on a woman born in the late 1950's to a very different world, She is Irish, a Girl and poor and so faces all of the second class citizen issues that Celie does."[Y]ou were a slut or a tight bitch, one or the other" even from her own brothers and her father acknowledged it also saying if she was not careful she'll "soon get a name". So perhaps she did get a name, was she was merely asking for the abuse she got? A realist would argue that as a woman coming of age in such a male dominated era, it is easy to see how a lowly woman can get lost in the system. Paula belonged to the working class, cleaning offices for a living, struggling to cope with four children, resorting to drink and becoming an eventual alcoholic. No wonder her husband had to beat her, she was a terrible mother and an even worse wife. She failed at education, failed at work, and is now failing in life. Are we to believe that because of her failures that is why she is abused, and thence the abuse caused her to fall even deeper thus creating a vicious circle, or is it, that she simply picked the wrong man? It is not that she set out to fail at life but she was simply unlucky in love. Paula "stopped being a slut the minute Charlo Spencer started dancing with her". She believed he was her soul mate, Charlo he could turn her life around for the better, everyone called her a slut. Every girl was called a slut but she could not handle that. Perhaps Charlo thought she really was a slut, but before they got married it seemed their relationship was perfect, sex was amazing especially on their honeymoon, "all week. ...read more.

Any other person surely would have been a lot more traumatised if they lost their virginity to the man they called father but not Celie, was it because she knew she was in love with women and so a man raping her did not seem as invasive as it should have done? Walker conveys the psychological damage of perpetual abuse of a person throughout not only their own life but the life of their ancestors. Sexism and racism heap psychological damage on their victims for generations, not to mention the clear sociological problems that germinate from them. In conclusion both authors present domestic violence in such different ways, yet we can see clear similarities in the mindset of the women despite their outwardly differences. Both are graphic and basic depictions of abuse but powerful nonetheless. Doyle adds more depth to Paula by portraying this because we see that domestic violence can act as a learning curve for its victims and we see signs of this in the sequel to this text "Paula Spencer". Walker's Celie too comes through the abuse and has effectively turned her life around for the better. Walker herself has rejected Christianity and is more in favour of a pantheist view which she portrays clearly in Shug Avery; there is a belief that God is everything and is in everything. As opposed to the Christian belief that God created nature, pantheists believe in a "spiritual revolution of the union of the mind and nature". Celie comes to accept this view of the world, so she opens her final letter "Dear God. Dear stars, dear trees, dear sky, dear peoples. Dear Everything. Dear God". A Christian critic would argue that by doing this it becomes an insult to God. When Celie was writing to God nothing changed for the better, much, and she was still being raped and beaten, whereas once she stops writing to God and accept this new outlook, her life changes drastically. Are we to believe then that religion causes this abuse? Martin Bailey 13s - March 2007 ...read more.