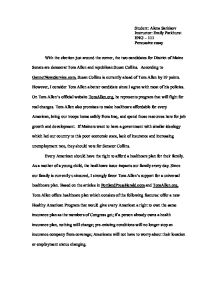 Student: Alena Sarkisov Instructor: Emily Parkhurst ENG - 111 Persuasive essay With the election just around the corner, the two candidates for District of Maine Senate are democrat Tom Allen and republican Susan Collins. According to GannetNewsService.com, Susan Collins is currently ahead of Tom Allen by 19 points. However, I consider Tom Allen a better candidate since I agree with most of his policies. On Tom Allen's official website TomAllen.org, he represents program that will fight for real changes. Tom Allen also promises to make healthcare affordable for every American, bring our troops home safely from Iraq, and spend those resources here for job growth and development. If Mainers want to have a government with similar ideology which led our country to this poor economic state, lack of insurance and increasing unemployment rate, they should vote for Senator Collins. Every American should have the right to afford a healthcare plan for their family. ...read more.

On the other hand, Susan Collins voted to authorize the resolution of invasion in Iraq. The US government should set a timeline to bring all American troops home within the next year or two, while Senator Collins thinks that it's the wrong thing to do (KennebecJournal.MaineToday.com). Another major issue that I am concerned about is a current state of US economy, inflation, and the increase in gas prices. Tom Allen's campaign called for an end to tax cuts that benefit large corporations and keep increasing US deficits. Instead, he proposed to offer a similar tax cut to middle and low income working families (The Lewiston Sun Journal). In addition to the issues described above, an education plan proposed by Tom Allen is very appealing to me. According to the main features of his plan posted on Tom Allen's website TomAllen.org, it would increase resources available to colleges and ensure that students would receive an adequate amount of federal financial aid. ...read more.

These facts reflect her dedication and reliability. According to PressHerald.MaineToday.com, during Senator Collins' twelve year career in U.S. Senate, she worked on securing defense-related projects, increasing heating assistance for Mainers, modernizing postal service, strengthening Federal Emergency Management Agency after hurricane Katrina, and requiring Iraqi government to apply its own resources on reconstruction instead of U.S. funds. Thus, I feel that she acted in the interest of the state and nation. In conclusion, despite Senator Collins' advantages, I still disagree wit her points of view on the war in Iraq, tax cuts to corporations and her lack of support for universal healthcare plan. The contrasts between the two candidates could not be clearer. Susan Collins has acted in the interest of the President and Republican Party, while Tom Allen consistently stood up to the Bush administration and has always fought for Mainers. He has a record to be proud, and it shows what kind of Senator he will be. Hopefully, if Tom Allen gets elected, he will live up to his words and promises by becoming a fighter for the low and middle class. ...read more.