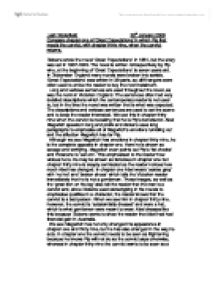 Compare chapter one of Great Expectations(TM) in which Pip first meets the convict, with chapter thirty nine, when the convict returns.

Leah Waterfield 30th January 2008 Compare chapter one of 'Great Expectations' in which Pip first meets the convict, with chapter thirty nine, when the convict returns. Dickens wrote the novel 'Great Expectations' in 1861, but the story was set in 1807-1823. The novel is written retrospectively by Pip who, at the beginning of 'Great Expectations' is seven years old. In Dickensian England many novels were broken into serials. 'Great Expectations' was written in 39 parts, so cliff hangers were often used to entice the reader to buy the next instalment. Long and verbose sentences are used throughout the novel, as was the norm in Victorian England. The sentences often had very detailed descriptions which the contemporary reader is not used to, but in the time the novel was written that is what was expected. The descriptions and verbose sentences are used to set the scene and to keep the reader interested. We see this in chapter thirty nine when the convict is revealing that he is Pip's benefactor. Abel Magwitch speaks in long and prolix and dickens uses long paragraphs to emphasise all of Magwitch's emotions tumbling out and the affection Magwitch has for Pip. Although we see Magwitch has emotions in chapter thirty nine, he is the complete opposite in chapter one. ...read more.

Similarly, in chapter thirty nine the phrase 'stormy and wet' is repeated three times to emphasise how awful the weather is and how it is continuous. Pip is also a 'bundle of shivers' because Dickens is trying to show how emotional the child is. Pip is 'afraid of it all' meaning that his surroundings scare him, as well as the fact that he is an orphan and his sister, who looks after him, is violent and aggressive. This makes the reader pity Pip and sympathise with him. In chapter one we are told of the gibbet, reminding the Dickensian reader what could happen if Pip gets caught for taking food, as was done in the time of the novel. Dickens arouses our sympathies for Pip by telling the reader that Pip is crying and reminding the readers that Pip is just a child. When Pip is threatened by the convict, the readers feel more sympathy for Pip so when we see the gibbet at the end we feel that it would not be fair if he was caught because he was just an innocent child being bullied into stealing from his sister. Dickens uses bad weather at the beginning of each chapter to emphasise that something untoward is about to happen. ...read more.

This is hugely contrasted later on in the novel when he is wealthy, yet selfish. An example is when Joe comes to see Pip and Pip is extremely rude to Joe, who has been there for him all of his life. When Pip is rude to Joe, the readers are reminded that in Victorian England all men wanted to be a 'gentleman', yet a gentleman in the nineteenth century was someone who had money and status. Even if someone was churlish and uncouth they would still be classed as a gentleman if they had status. Due to this, Pip got away with being boorish toward Joe. Chapter one is the perfect setting for something terrible to occur because the place was 'bleak', 'overgrown' and 'intersected with dykes'. Like chapter thirty nine, Pip is used to being there. Pip is alone and is scared of his surroundings, such as the sea, saying it was a 'savage lair' as in the den where a monster would live. Therefore we are not surprised when the convict arrives. Chapter thirty nine, however, is in a pleasant setting yet Pip is alone again. The weather is similar with an 'eternity of cloud and wind'. Death is also brought into the chapter, much like chapter one, when we hear about 'shipwreck and death'. Readers would notice this and, as well as being reminded of chapter one, would also know that something unpleasant is about to happen. ...read more.