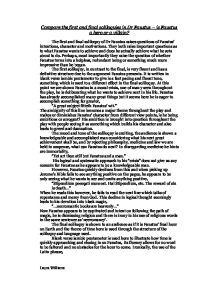 Compare the first and final soliloquies in Dr Faustus - is Faustus a hero or a villain?

Compare the first and final soliloquies in Dr Faustus – is Faustus a hero or a villain?

The first and final soliloquy of Dr Faustus raises questions of Faustus’ intentions, character and motivations. They both raise important questions as to what Faustus wants to achieve and does he actually achieve what he sets about to do. Perhaps, most importantly they raise the question of whether Faustus turns into a helpless, redundant being or something much more impressive than he began.

The first soliloquy, in contrast to the final, is very fluent and has a definitive structure due to the argument Faustus presents. It is written in blank verse iambic pentameter to give is a fast pacing and fluent tone, something which is used to a different effect in the final soliloquy. At this point we are shown Faustus in a moral crisis, one of many seen throughout the play, he is deliberating what he wants to achieve next in his life. Faustus has already accomplished many great things but it seems here he is eager to accomplish something far greater,

The ambiguity of this line becomes a major theme throughout the play and makes or diminishes Faustus’ character from different view points, is he being ambitious or arrogant? His ambition is brought into question throughout the play with people seeing it as something which builds his character and also leads to greed and damnation.

The mood and tone of the soliloquy is exciting, the audience is shown a knowledgeable and accomplished man considering what his next great achievement shall be, and by rejecting philosophy, medicine and law we are held in suspense, what can Faustus do next? In disregarding medicine he hints are immortality,

“Yet art thou still but Faustus and a man.”

His logical and systematic approach to his “crisis” does not give us any concern for Faustus as he appears to be a knowledgeable man.

When he reads this however, he fails to read the next line which talks of repentance and mercy from God. This decline in logical thought seemingly leads to his devotion into black magic,

Now Faustus appears to be captivated and intent on following the path of magic, he is dismissing religion and there is irony in his use of religious words in the same sentence as ‘necromancy’.

The final soliloquy is shown to an audience as if it is Faustus’ final hour on Earth and the theme of time here is used through the structure of the soliloquy and language used.

Blank verse iambic pentameter is used here to illustrate how time is quickly approaching and closing in on Faustus, its fluency allows for no word to be faltered and no obstacles for the hour to come. Ironically, the use of the Latin phrase,

by Faustus translating into,

is from a poem about a lover wanting to prolong the night he is spending with his mistress.

Faustus’ mood and tone in the final soliloquy is very different to the first, Faustus appears to be struggling with his final hour upon Earth and is almost begging for more time,

This decline in length of time throughout the line also represents how little time Faustus still actually has.

The ambiguity from the first soliloquy is also continued through the final and could be seen as more prominent with a number of things having different meanings attached around them. In the first soliloquy he deceives himself into believing that only negative things are contained in the Bible any perhaps Hell doesn’t exist but he still doesn’t repent here even though Hell is moments away. This following quote however could indicate an outside force is preventing Faustus from being able to repent,

Is Faustus being physically held down here or is he actually holding himself back as he still doesn’t REALLY want to repent? Marlowe could be suggesting here that Faustus is still deluded and having served Lucifer for so long cannot break free.

The final soliloquy brings up an important argument for critics, is Faustus here a hero or a villain? Cleanth Brooks commented on Faustus’ poetry and how Faustus at the end still maintains dignity,

“Faustus at the end is still a man, not a cringing wretch, the poetry saves him from abjectness… he maintains to the end his individuality of mind…”

Faustus does take responsibility for his actions during the final soliloquy,

and the moving poetry of his final hour is said with dignity. His ambition and aspirations in this aspect have not been in vain, he has achieved what he set out to do and not repenting shows how he doesn’t regret this.

However, the argument that Faustus’ bargain with Lucifer and his desire for immortality has in the end led to his downfall is also another possibility. In a certain light it could be seen that Faustus is a coward, despairing of his choices and terrified. J B Steane criticizes Faustus,

“in the end he cowers, and hides…”

He seems to take responsibility for his own actions as seen above but momentarily after turns this around onto Lucifer,

Faustus is now trapped by the time is longed for, his sanity is also brought into question with the use of elements,

He appears to believe he can hide from Lucifer in the air and water which are not feasible.

To conclude the first and final soliloquies both provide excellent insights and questions of Faustus’ character and thoughts for the audience. The also conjure an question of whether Faustus is a hero or a villain and constant ambiguity, throughout this play, provides excellent arguments for both sides.