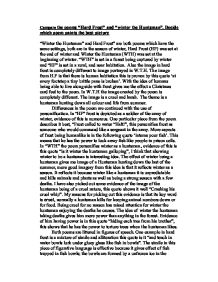 Compare the poems &quot;Hard Frost&quot; and &quot;winter the Huntsman&quot;. Decide which poem paints the best picture.

Compare the poems "Hard Frost" and "winter the Huntsman". Decide which poem paints the best picture "Winter the Huntsman" and Hard Frost" are both poems which have the same settings, both are in the season of winter, Hard Frost (HF) was set at the end of winter and Winter the Huntsman (WTH) was set at the beginning of winter. "WTH" is set in a forest being captured by winter and "HF" is set in a rural, and near habitation. Also the image in hard frost is completely different to image portrayed in W.T.H. The image from H.F is that there is human habitation this is proven by this quote 'at every footstep a tiny brittle pane is broken'. With the idea of humans being able to live along side with frost gives me the effect a Christmas card feel to the poem. In W.T.H the image created by the poem is completely different. The image is a cruel and harsh. The theme is a huntsman hunting down all colour and life from summer. Differences in the poem are continued with the use of personification. ...read more.

Evidence of him having power is in this quote "hiding each tree from his brother", this shows that he has the power to torture trees when the huntsman likes. Both poems are littered in figures of speech. One example in hard frost is a mixture of simile and alliteration this quote is it "and tench in water bowls lurk under gluey glass like fish in bowls". The simile in this piece of figurative language is effective because it gives effect of fish trapped in fish bowls; the bowls are formed by a unfrozen ice in the centre of a pond, giving the comparison of tench acting like goldfish. The alliteration in this poem 'gluey glass' reinforces the idea of the fish being trapped in bowls; it does this by the 'gl' sound made when you say the words. The effect is given because if you say 'gl' it slows down your speaking speed. This is similar to the situation the fish are in, because the fish are stuck in the bowls and the alliteration slows down your speech rather like glue does to objects. ...read more.

The key word in the sentence to give the idea of human habitation is 'footsteps'. With idea of human habitation this poem gives me the image of a Christmas card. In winter the huntsman this is completely opposite, because it's more about winter taking over life and being cruel to what's left of life. Evidence of this is "as night creeps from the ground hides each tree from its brother" this gives me the image that he is isolating the trees so that makes them more vulnerable to the winter. I got the impression he is killing trees and being harsh. This is in the sentence "till many a mighty branch is torn asunder" this means that he is ripping the limbs of the trees making them feel pain. In the end both poems are different in imagery but the best image in my opinion is the one in hard frost because it's the Christmas that everyone tends to see. However winter the huntsman is more realistic but it is a image of winter that people don't want to see, because of the holiday of Christmas. ...read more.