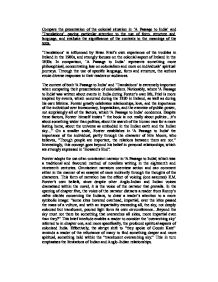 Compare the presentation of the colonial situation in 'A Passage to India' and 'Translations', paying particular attention to the use of form, structure and language, and evaluate the significance of the contexts to the meanings of the texts.

Compare the presentation of the colonial situation in 'A Passage to India' and 'Translations', paying particular attention to the use of form, structure and language, and evaluate the significance of the contexts to the meanings of the texts. 'Translations' is influenced by Brian Friel's own experience of the troubles in Ireland in the 1980s, and strongly focuses on the colonial aspect of Ireland in the 1830s. In comparison, 'A Passage to India' represents something more philosophical, concentrating less on colonialism and more on individuals' spiritual journeys. Through the use of specific language, form and structure, the authors evoke diverse responses in their readers or audiences. The context of both 'A Passage to India' and 'Translations' is extremely important when comparing their presentations of colonialism. Noticeably, where 'A Passage to India' was written about events in India during Forster's own life, Friel is more inspired by events, which occurred during the 1830 in Ireland, as well as during his own lifetime. Forster greatly celebrates relationships, love, and the importance of the individual over bureaucracy, Imperialism, and the exercise of public power, not surprisingly all of the factors, which 'A Passage to India' condemns. Despite these factors, Forster himself insists " the book is not really about politics...it's about something wider than politics, about the search of the human race for a more lasting home, about the universe as embodied in the Indian earth and the Indian sky..." ...read more.

He does not come." Godbole accepts the shortcoming of Hinduism, and yet is still content. While Forster is not promoting Hinduism as the religion to resolve the problems of unity, he is stressing its spiritual attributes, reinforcing his belief in the importance of the spiritual understanding of the individual. Importantly, it is Mrs Moore's spirit which lives "to become a Hindu Goddess to sway Adela's mind and to change the course of justice.5" Friel believes that the Irish are constantly overshadowed by "the sound of the English language...which forms and shapes us in a way that is neither healthy nor valuable for us...6" Friel, through the characters in 'Translations', articulates his concern that the nature of language is an expression of racial and cultural awareness, which basic translation is unable to preserve. By taking the example of Maire and Yolland, an audience experiences the inadequacy of translation- "Does he know what I'm saying?" Friel's translation of 'Three Sisters' into a 'new kind of English' illustrates his desire to make 'an English' identifiable to Ireland. This strongly supports Friel's personal belief that basic translation destroys the cultural meaning of names and places, in a particular context, coming from a particular mouth. Friel and Forster both adopt different forms to compliment the purposes of their individual works. Friel chooses the style of a play partly because of its visual benefits. Notably, the tableau at the close of act one has a dramatic effect, and portrays the relevant characteristics of the attendees to the hedge school. ...read more.

She closes her mouth. Her head goes down." In contrast to this, in 'A Passage to India' Forster suggests that identity is found on a more spiritual level, and is only masked by names, culture and relationships. Ironically, while Forster focuses on the complexity of three different religions, places and seasons to emphasise the importance of the individual, Friel adopts the small hedge school of Baile Beag, and the personal relationships within the school to stress the significance of language on a larger scale, and its importance when considering Ireland's loss of identity through colonisation. In 'A Passage to India' Forster questions the importance of language, relationships and culture, illustrating the significance of the spiritual understanding of the individual. Forster achieves this primarily through the character of Mrs Moore, and the spirituality of Hinduism. However, the issue of colonialism is less important in 'A Passage to India', and plays a more prominent role in Friel's 'Translations'. Unlike Forster, through the colonialism of Baile Beag Friel demonstrates his belief that the core of a person's individuality is held in language, and without it their culture, relationships and names are lost. 1 Themes and Issues- Hilda D. Spears 2 The historical and colonial context of Brain Friel's translations' 3 Themes and Issues- Hilda D. Spears 4 Themes and Issues- Hilda D Spears 5 Themes and Issues- Hilda D Spears 6 Our Own Language: 'Translations' (1980) and a translation of Chekhov's Three Sisters (1981) 7 Eileen Underhill 8 Eileen Underhill 9 Themes and Issues- Hilda D Spears. 10 History, Language and the Post-colonial question in Brian Friel's Translations. Leon Litvack. 11 Eileen Underhill ...read more.