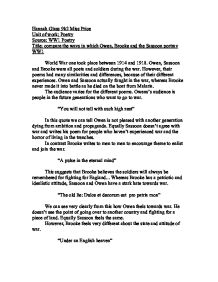 Compare the ways in which Owen, Brooke and the Sassoon portray WW1

Hannah Glass 9k2 Miss Price Unit of work: Poetry Source: WW1 Poetry Title: compare the ways in which Owen, Brooke and the Sassoon portray WW1 World War one took place between 1914 and 1918. Owen, Sassoon and Brooke were all poets and soldiers during the war. However, their poems had many similarities and differences, because of their different experiences. Owen and Sassoon actually fought in the war, whereas Brooke never made it into battle as he died on the boat from Malaria. The audience varies for the different poems. Owens's audience is people in the future generations who want to go to war. "You will not tell with such high zest" In this quote we can tell Owen is not pleased with another generation dying from ambition and propaganda. Equally Sassoon doesn't agree with war and writes his poem for people who haven't experienced war and the horror of living in the trenches. ...read more.

"Lonesome dark" Has a great effect of loneliness and depression. It makes you feel pity towards the soldiers. He uses quotes like this to show his feelings towards the war. He also uses rhythm to help you understand the emotions of a simple boy, who is in a war beyond all his nightmares. In contrast Owens, poem, Dulce et Decorum est Pro Patria Mori, uses descriptive devices graphically to help with the understanding the horrific lifestyle these men had to go through. "guttering, choking, drowning" Describes the worst things in order. He repeats 'ing' because it gives rhythm and adds to the imagination. In Brooke's poem there is a lot of devices, not quite as many as Owen though, but more than Sassoon. In the first part of his poem he rhymes every other line to keep the poem in line and interesting. "England bore, shaped, made away" He uses personification to change England into a mother; someone who loves us and made us what we are. ...read more.

Owen really doesn't like this line so twists it so everyone can see it's wrong and shouldn't be said. Like the rest of his poem, Sassoon's title is blunt, stark and delivers a message. "Suicide in the trenches" Once you've read the title you instantly know what Sassoon thinks by the words he uses. He suggests the horror of war in a sentence. In contrast to Sassoon's title, Brooke's is mysterious, and you can't really tell what he is about to talk about in his poem. In conclusion I have found Sassoon's poem, the most effective yet Owens poem, Dulce et Decurum est is more interesting. I presume, while reading Sassoon's poem; the soldier, your mind almost switches off, because he talks in an idealistic way. Owens poem gives us the most insight into the war, through describing details which were true and describing the true life for men which he had experienced. In talking about his own experience it gives us the impression he knows what he is talking about. ...read more.

*** 3 Stars
A good essay which uses PEE effectively throughout though there are times when Sassoon needs to be quoted more and certain statements need to be supported by a quote.
Some good analysis of language and structure. Writer clearly understands poems and looks at the differences and similarities throughout the essay. A good conclusion which summarises the essay and allows the writer to give
their personal response.