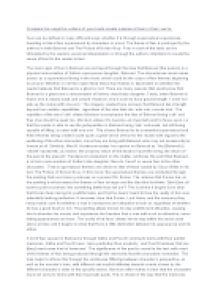 Transfer-Encoding: chunked ﻿Compare the ways the writers of your texts create a sense of fear in their works. Fear can be defined in many different ways, whether it is through supernatural experiences, haunting or literal fear experienced by characters in a text. The theme of fear is portrayed by the authors in both Beloved and The Picture of Dorian Gray. Fear in each of the texts can be stimulated by the reader?s personal interpretation or through the author?s intentions to create the sense of fear for the reader to feel. The main signs of fear in Beloved are portrayed through the idea that Beloved (the person) is a physical reincarnation of Sethe?s eponymous daughter, Beloved. The character we meet comes across as a supernatural being in the novel, which could be the cause of fear themes beginning to unravel. Whether or not the reader feels these fear themes is dependent on whether the reader believes that Beloved is a ghost or not. There are many reasons that could prove that Beloved is a ghost and a reincarnation of Sethe?s dead baby daughter. Firstly, when Beloved is found, she is clearly weak and unwell. However, she is seen to have great strength. ?I seen her pick up the rocker with one arm.? The imagery created here conveys that Beloved has strength beyond her realistic capabilities, regardless of the idea that she ?acts sick, sounds sick.? The ...read more.

Dorian?s fears of lacking perfection are always hinted by the narrator, and rarely stated by Dorian himself. An example of this in Beloved is that although we know that Sethe killed her own child, and roughly what happened, it is never actually stated in the text: Sethe killed Beloved. The killing of Beloved is foreshadowed from the very beginning of the novel, however the clearest version of events unfolds during chapter 18. The idea of sin is apparent through both texts, as Sethe sins by killing her own daughter, and Dorian sins by chasing a life of pleasure and forgetting any of his morals to do so. The differences between the situations are that Sethe sinned because she thought it was for the best interest of her child. She really felt that the child would be better dead than living the unfortunate, horrible life she had. Dorian on the other hand, had felt no suffering throughout his life, and had no excuse for sinning other than for his own, selfish, personal gain and pleasure. The little we find out about Beloved?s death, shows that Sethe has not come to terms with her traumatic memories of killing her daughter. Morrison allows for the whole memory to be as faded and washed out to the reader as it seems to be for Sethe. ...read more.

He himself would have had to have conducted himself through different personalities, due to the intolerant society that he would have been living in around the time he wrote the novel. Similarly to Wilde, Morrison had experiences in the topic of her writing. Morrison specialised in black fiction, allowing her to be very knowledgeable when it came to writing such a novel. Although Morrison?s own personal believes do not shine through as blatantly in any parts of her novel as Wilde?s do, it is clear to detect her passion for her subject throughout Beloved and she is able to distinguish themes such as fear throughout the novel because of her beliefs that accurate history had been lost due to forced silence upon the subject. Morrison incorporates the ?ghost? idea into her novel and the imagery of haunting, perhaps to suggest that the subject of slavery will haunt us if we do not face up to it, much like Beloved haunts Sethe until she faces up to her reality. Fear is a theme that is apparent in both novels and both authors use similar techniques to attach the fear ideology to their texts. Their works allow for the harsh reality of their subjects to become apparent and themes of supernaturalism and sinning shine through in both texts. The novels are based upon two very different subjects, however, the messages intended by the authors are not all that different. ...read more.