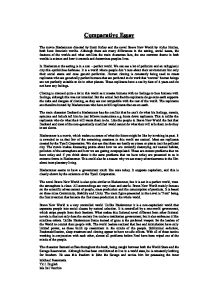 Comparative Essay The movie Bladerunner directed by Scott Ridley and the novel Brave New World by Aldus Huxley, both have futuristic worlds. Although there are many differences in the setting, social issues, the features of the worlds and what conflicts the main characters face, the one common theme in both worlds is science and how it controls and determines peoples lives. In Bladerunner the setting is in a non - perfect world. We can see a lot of pollution and an unhygienic city this symbolizes darkness. It is a world where people don't care about their environment but only their social status and ones genetic perfection. Human cloning is constantly being used to create replicants who are genetically perfect humans that are perfected to do work that 'normal' human beings are not perfectly suitable to do in other planets. These replicants have a use by date of 4 years and do not have any feelings. ...read more.

Most are replicants created by the Tyrell Corporation. We also see that there are hardly any trees or plants just the polluted city. The movie makes interesting points about how we are currently destroying our natural habitat, pollution of the atmosphere and how we are getting overpopulated. These are current problems that we have today and if you think about it the same problems that we have today are presented to us in extreme forms in Bladerunner. This could also be a reason why we see many advertisements in the film about inter planetary living. Bladerunner seems to have a government much like ours today. It supports capitalism, and this is clearly shown by the existence of the Tyrell Corporation. The novel Brave New World is also quite similar to Bladerunner, but it is set in a perfect world, were the atmosphere is clean. All surroundings are very clean and sterile. ...read more.

The character Bernard suffers throughout the book, being caught between both the World State and the Savage Reservation. Although he has been conditioned to live in a world state, he is constantly looking for freedom. He sees this freedom in John the Savage and envies him for possessing the inner happiness that Bernard's society outlaws. Bernard's character in this novel is an example of struggle between freedom and slavery. This novel clearly outlines that a genuine free life requires suffering and pain. People without suffering are people without soul. Unlike Bladerunner, Huxley's future describes a world without pain and a world without soul. My personal opinion on the main theme of human cloning is that it should not take place in out society neither now nor in the future. Being from a Christian religious background I strongly believe that the fate of a human should be left in the hands of God. Comparative Essay ?? ?? ?? ?? Michael Psaromatis Yr11 English Ms Del Vecchio ...read more.