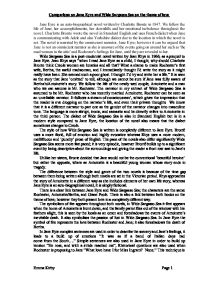 Jane Eyre is an auto-biographical novel written by Charlotte Bronte in 1847. We follow the life of Jane; her accomplishments, her downfalls and her emotional turbulence throughout the novel. Charlotte Bronte wrote the novel in Standard English and uses French dialect when Jane is communicating with Adele and also Yorkshire dialect due to the location in which the novel is set. The novel is narrated by the omniscient narrator, Jane Eyre; however it can be argued that Jane is not an omniscient narrator as she is unaware of the events going on around her such as 'the mad woman in the attic' and Rochester's feelings for Jane, until they are revealed to her. Wide Sargasso Sea is a post-modernist novel written by Jean Rhys in 1966; as a prequel to Jane Eyre. Jean Rhys says "when I read Jane Eyre as a child, I thought, why should Charlotte Bronte think Creole women are lunatics and all that? What a shame to make Rochester's first wife, Bertha, the awful madwoman, and I immediately thought I'd write the story as it might really have been. She seemed such a poor ghost. I thought I'd try and write her a life." It is seen as the story that Jane 'omitted' to tell, although we cannot be sure if Jane was fully aware of Bertha's/Antoinette's story. ...read more.

Simple sentences are also used in Jane Eyre in order to build up tension "He rose, and with a stride reached me", Rhetorical questions are also used when Rochester is proposing to Jane "What love have I for Miss Ingram? None." This technique is also effective in building up tension. The sentence structure and the other techniques used by Charlotte Bronte are used to keep the reader interested and keen to read on. Similar to this Jean Rhys uses techniques to build up tension, short sentences are used more often in the novel, to show the sarcasm and bluntness of the character, Rochester "I looked round suspiciously". However complex sentences are used to build up the tension between Rochester and Antoinette, and how Rochester does not want to be with Antoinette or at the 'honey moon house' "There was a carpet, the only one I had seen...". Jane Eyre is seen to be one of the most romantic novels of all time; we see this in chapter 23 of my chosen extract where Rochester proposes to Jane for love rather than money "Make my happiness and I will make yours." Even though Jane is of a lower status than Rochester, he loves her. It is not about money, social status, Rochester sees Jane as his equal. ...read more.

Antoinette and Rochester's relationship is very sour, but passionate in a physical sense. The language used in my extract between Rochester and Antoinette shows tension in their relationship and that they are not comfortable within each others company. "You look like a king, an emperor" "God forbid". Rochester will not accept any of Antoinette's complements, making the atmosphere awkward. The relationship between Antoinette and Rochester is very one sided, Antoinette seems to have 'pleasing drama', as she clearly wants to please everyone. The disclosure is not we could expect from a newly wed couple it is laced with sarcasm and criticism. In comparison Rochester's and Jane relationship is very playful and romantic; the passion between them is based on emotion rather than sex. The language used in my extract when Rochester proposes is playful banter. "Do you doubt me, Jane?" "Entirely." "You have no faith in me?" "Not a whit." Reiteration is used to emphasise the playfulness between Rochester and Jane, and builds up the tension where Jane finally accepts Rochester as her husband. In comparison to Antoinette, Jane is a strong independent individual and seems to have the strength of nature to stand up against Rochester. Quote word count: 162 Other word count: 1480 Total word count: 1642 ?? ?? ?? ?? Comparison on Jane Eyre and Wide Sargasso Sea on the theme of love Emma Kirby Page 1 ...read more.