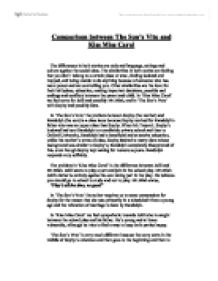 Comparison between The Son's Vito and Kiss Miss Carol

Comparison between The Son's Vito and Kiss Miss Carol The differences in both stories are style and language, settings and culture against the social class. The similarities in both stories are feeling that you don't belong to a certain place or area, feeling isolated and trapped, and being unable to do anything because of someone who has more power and are controlling you. Other similarities are the love for their birthplace, education, making important decisions, possible sad endings and conflicts between the parent and child. In 'Kiss Miss Carol' we feel sorry for Jolil and possibly Mr.Miah, and in 'The Son's Veto' with Sophy and possibly Sam. In 'The Son's Veto' the problem between Sophy (the mother) and Randolph (the son) is a class issue because Sophy worked for Randolph's father who was an upper class than Sophy. When Mr.Twycott. Sophy's husband had sent Randolph to a creditable private school and then to Oxford University, Randolph had a beneficial and extensive education, unlike his mother's terms of class. Sophy desired to marry Sam whose background was similar to Sophy's; Randolph completely disapproved of this, even though Sophy kept asking for numerous years. Randolph responds very selfishly. ...read more.

When her son forced her to swear before the cross and alter and this would enable Sophy to remain unbelievably unsatisfied, helpless and woeful. The conclusion in 'Kiss Miss Carol' would seem as if the ending was a delightful one. This is not the only possible reason because Jolil's father came into the school but didn't know Jolil would take part in the play so he could have gone back into the streets looking for those bags they dropped while they were being chased by racists. The racists could have been waiting for him while being very happy in the play. This makes the reader think of what could happen to Mr.Miah in 'Kiss Miss Carol' it gives us the idea "Or maybe he had stepped out on the streets again, looking for the bags they'd dropped." Sophy swore she wouldn't change her mind or rearrange the situation; she had to stick to her promise. This caused a barrier between her and Sam and ultimately changed her life and emotions. At one point Sophy had happened to stand up without help, after this devastating incident, she felt useless, worthless and she gave up all hopes and attempts of regaining her use of legs. ...read more.

There is also the sentiment of segregation in both stories. In 'The Son's Veto' "... Or never left the house in the long southern thoroughfare, where she seemed to be pining her heart away." In 'Kiss Miss Carol' Mr.Miah feels lonely and isolated. He does not take people around him and the racist abuse he receives from racists in the area. In 'The Son's Veto' Sophy is secluded and forlorn in London for the reason that her son's at university, her husband's deceased and does not integrate with the adjacent region. The story I favoured overall was 'The Son's Veto' for the reason that it consisted of a cataclysmic finale and the language was commendable, remarkable and diverse. The style was finally accustomed to the story due to the commiseration and grief that the author projects towards Sophy. The extensive portrayal provides a clich� and comprehensible acquaintance and representation of the dilemmas in the story. It also has an immense consequence on the reader, because it primarily makes the reader recognize the condition and the obstacles in the story. In this present generation people would have selected Sam over their son if they were in Sophy's situation. Sophy was trapped between Sam and her son and she chose her son, which displays how things were in the past. People remained solidly to their priorities rather than being indulged in anything. ...read more.