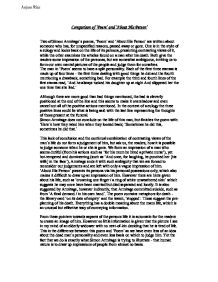 Comparison of 'Poem' and 'About His Person'.

Comparison of 'Poem' and 'About His Person' Two of Simon Armitage�s poems, 'Poem� and 'About His Person� are written about someone who has, for unspecified reasons, passed away or gone. One is in the style of a eulogy and looks back on the life of its persona, presenting contrasting views of it, while the other examines the articles found on a man after his death. Both give the readers some impression of the personas, but are somewhat ambiguous, inviting us to form our own mental pictures of the people and judge them for ourselves. The man in 'Poem� seems to have a split personality. Each of the first three stanzas is made up of four lines - the first three dealing with good things he did and the fourth mentioning a drawback, something bad. ...read more.

We form an impression of a man who seems dutiful (from his actions such as 'for his mum he hired a private nurse'), yet hot-tempered and domineering (such as 'And once, for laughing, he punched her [his wife] in the face�), Armitage ends it with such ambiguity that we are forced to reconsider our judgements and are left with only a vague impression of him. 'About His Person� presents its persona via his personal possessions only, which also makes it difficult to draw up an impression of him. However there are hints given about his life, such as 'crowning one finger / a ring of white unweathered skin� which suggests he may once have been married but died separated and lonely. It is also suggested by Armitage, however indirectly, that Armitage committed suicide, such as from 'A final demand / in his own hand�. ...read more.

Yet the fact that we do is exactly what Simon Armitage is trying to illustrate - that human nature is to draw up impressions of people from almost no basis. Both of these poems are written from a detached, impersonal view which adds to their effect. This shows that the impressions created are from an uninvolved unbiased individual and that the people described could be anyone - even relatives of the reader. In conclusion, neither poem presents a detailed impression of the man who has departed this life. However through the ambiguous double-meanings, impersonal approach and cleverly thought-out structure they invite the readers to do the impression creation and so ask how we have done this and how we have managed to judge someone who is known to us only through a few lines of poetry. ...read more.