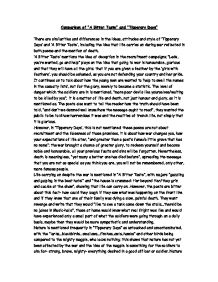 comparison of the 'Tipperary Days' and 'A Bitter Taste' sections of the anthology, Up the line to death

Comparison of “A Bitter Taste” and “Tipperary Days”

There are similarities and differences in the ideas, attitudes and style of ‘Tipperary Days’ and ‘A Bitter Taste’, including the idea that life carries on during war reflected in both poems and the mention of death.

‘A Bitter Taste’ mentions the idea of deception in the recruitment campaigns; “Lads, you’re wanted, go and help” plays on the idea that going to war is honourable, glorious and that they will have all the girls; that if you are given a feather by the ‘girls with feathers’, you should be ashamed, as you are not defending your country and her pride.

It continues on to talk about how the young men are wanted to ‘help to swell the names in the casualty lists’, not for the glory, merely to become a statistic. The level of danger which the soldiers are in is mentioned, “more poor devils like yourselves/waiting to be killed by you”; it is a matter of life and death, not just honour and glory, as it is mentioned as. The poets also want to tell the reader how the truth should have been told, “and don’t we damned well know/how the message ought to read”, they wanted the public to be told how horrendous it was and the realities of trench life, not simply that it is glorious.

However, in ‘Tipperary Days’, this is not mentioned; these poems are not about recruitment and the falseness of those promises, it is about how war changes you, how your expectations of life alter, “and greater than a poet’s fame/a little grave that has no name”; the war brought a chance of greater glory, to redeem yourself and become noble and honourable, all your previous faults and sins will be forgotten. Nevertheless, death is meaningless, “yet many a better one has died before”, spreading the message that you are not as special as you think you are, you will not be remembered, only other, more famous people.

Life carrying on despite the war is mentioned in “A Bitter Taste”, with majors “guzzling and gulping in the best hotel” and “the house is crammed: tier beyond tier/they grin and cackle at the show”, showing that life can carry on. However, the poets are bitter about this fact- how could they laugh if they saw what was happening on the front line and if they knew that one of their family was dying a slow, painful death. They want revenge and write that they would “like to see a tank come down the stalls...there’d be no jokes in Music-halls”, those at home would know what real fright was like and would have experienced only a small part of what the soldiers were going through on a daily basis, maybe then they would be more sympathetic and understanding.

Nature is mentioned frequently in “Tipperary Days” as untouched and uncontaminated, with the “larks...blackbirds.. swallows...finches..owls..hawks” and other birds being compared to the mighty magpie, who lacks nothing; this shows that nature has not yet been affected by the war and the idea of the magpie is something for the soldiers to aim for- strong, brave, mighty- everything desired in a good officer or soldier. Nature is also mentioned as offering protection and guidance to the soldier; he is loved, “each one a friend”, given guidance, “bid him be keen and swift as they” and the blackbird warning him, “sing well, for you may not sing another; brother, sing”; it is as if the bird has had a premonition and knows that something will happen, so is alerting him to the danger he is in and to make the most of life. In “A Bitter Taste”, nature is mentioned as well, however this time, it is mentioned as being corrupted by the warm, how “Sunsets” have been “slashed and gouged and seared into crimson”, showing that nature has been distorted by the war. The violence and the vivid colours, “scarlet” and “crimson”, emphasise how everything constantly relates back to the war, the colour of blood and the harsh sounds echoing the noises of the bombs.

Death is mentioned in both sections, the certainty of death, “come and die” and “chaps who are going to die”, it is not a possibility, it is inevitable, “I have a rendezvous with death”’, although they may not want to go to war, as they believe they will never return, they feel it is there duty and they have no choice! There is a contrast between the “mouthless dead” and the “men who call you to share their martyrdom”, the first suggesting that they have no voice, that no-one can hear them and that they cannot tell their horror stories, the latter telling the men to listen to the voices of the dead and not to the propaganda, implying that you can hear the deceased. Both parts tell you to make the most of life, “so be merry, so be dead” and “better twenty honest years/than their dull three score and ten”, it is better to die honest, fighting for your country; you should enjoy what life you have left, as you never know when you will go.

“A Bitter Taste” belittles the Germans, with the “Fat civilians wishing they ‘could go and fight the Hun’”; it is also criticising those in charge, who could not be more pleased, they just want to seem honourable. The majors in charge are criticised, “If I were fierce, and bald, and short of breath”, by making fun of and slamming their ignorance, it makes the soldiers seem more honourable and mature, able to rise above it.

Faith is a key part in the “Tipperary Days” section, with constant links to religion, “Jesus Christ and Barabbas” and references to the Lord, highlighting how important it was during the war- the men could feel protected and watched over. “Help me to die, O’lord” relates to the high regard they had of God, that he was the only one who could save them, thus they want to please him and constantly think, “what will the Gods say?”.

The phrase “washy verse” in “A Bitter Taste” shows that the war has gone so far, they are past false writing and are now into another territory, a place where everything has been corrupted by war and there is no point being positive about it- so many men have died, for what?