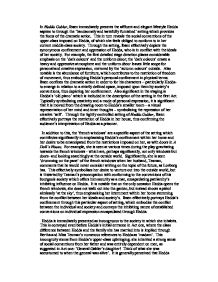 Confinement and self-liberation in 'Hedda Gabler'

In Hedda Gabler, Ibsen immediately presents the affluent and elegant lifestyle Hedda aspires to through the 'handsomely and tastefully furnished' setting which provides the focus of the dramatic action. This in turn reveals the social conventions of the upper-class imposed on Hedda, of which she feels obliged to conform to in her current middle-class society. Through the setting, Ibsen effectively depicts the synonymous confinement and oppression of Hedda, who is in conflict with the ideals of her society. For example, the first detailed stage direction places considerable emphasis on the 'dark colours' and the uniform d�cor; the 'dark colours' create a heavy and oppressive atmosphere and the uniform d�cor leaves little scope for personal and creative expression, mirrored by the 'autumn colours' outside. Also notable is the abundance of furniture, which contributes to the restriction of freedom of movement, thus embodying Hedda's personal confinement in physical terms. Ibsen confines the dramatic action in order to for his characters - particularly Hedda- to emerge in relation to a strictly defined space, imposed upon them by society's conventions, thus depicting her confinement. Also significant in the staging is Hedda's 'old piano' which is included in the description of the setting in the first Act. ...read more.

she intends on living the life of the upper-class lady she is accustomed to and not that of the wife of a bourgeois academic. In addition to this, Hedda is faced with the prospect of further restriction exemplified through her pregnancy which would result in her becoming wholly dependent on Tesman, and her identity being absorbed into the Tesman family who represent the epitome of conformation to bourgeois conventions. As Ibsen stated: 'Jorgen Tesman, his old aunts, and the elderly serving maid Berte together form a whole and a unity...For Hedda they appear as an inimical and alien power directed against her fundamental nature'; her existence would essentially be 'for Jorgen's sake'. The prospect of 'the most solemn of human responsibilities' and her conflict with society gradually result in Hedda's despair at her state of dependence, which is illustrated through her desire for control: 'For once in my life I want to have the power to shape a man's destiny'. On a larger scale, this essentially conveys her desire to defy the constraints of her patriarchal society and the confines of her gender. As in A Doll's House, her increasing despair is emphasised through her restlessness; she is seen at various points in the play gravitating between ...read more.

Hedda's determination to defy conventions is further emphasised through her 'frenzied dance melody' on the piano before her suicide. This can be perceived as a representation of Hedda trying desperately to express herself creatively. She is immediately silenced by her husband, offering a clear representation of patriarchal authority and the inhibitions this idealist society imposes on the self-expression of women. As with A Doll's House, Ibsen makes effective use of denouement in order to emphasise the moral significance of Hedda Gabler. Hedda eventually shoots herself in response to the confines of bourgeois society conventions: 'Nevertheless, I'm in your power. Dependent on your will and your demands. Not free. Still not free! (Rises passionately) No. I couldn't bear that'. Alienated by reality, she retreats into a fantasy world in which she can preserve her creative and idealistic 'self' and essentially commits suicide in order to exist within a fantasy, free from the confines of patriarchy and social conventions. The patriarchal society in which she existed offered no positive outlet for personal expression, and repressed the sexual and emotional desires of women, and to a lesser extent, men. ...read more.