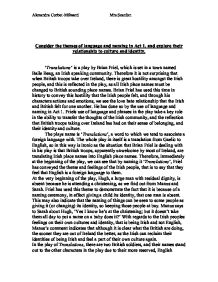 Consider the themes of language and naming in Act 1, and explore their relationship to culture and identity.

Consider the themes of language and naming in Act 1, and explore their relationship to culture and identity. 'Translations' is a play by Brian Friel, which is set in a town named Baile Beag, an Irish speaking community. Therefore it is not surprising that when British troops take over Ireland, there is great hostility amongst the Irish people, and this is reflected in the play, as all Irish place names must be changed to British sounding place names. Brian Friel has used this time in history to convey this hostility that the Irish people felt, and through his characters actions and emotions, we see the love hate relationship that the Irish and British felt for one another. He has done so by the use of language and naming in Act 1. Friels use of language and phrases in the play take a key role in the ability to transfer the thoughts of the Irish community, and the reflection that British troops taking over Ireland has had on their sense of belonging, and their identity and culture. ...read more.

In the play of Translations, there are two British soldiers, and their names stand out to the other characters in the play due to their more reserved, English sound. They are called Lancey, a crisp officer and expert cartographer, and Yolland, a soldier purely by accident. Their main job is to rename the Irish place names into British ones, The theme of language is very strong at this point in the play, as the point that Brian Friel is trying to get across is that Lancey and Yolland may be in Ireland to change Irish place names to English, but the minds, identities and culture of the Irish people will always be unreachable. Throughout Brian Friels play of Translations, there are references to other forms and ways of translating things, such as Owen, a considerate and enthusiastic young man, constantly translating Lanceys words, being the translator for the British army. The whole play itself is a translation from Gaelic to English, and Jimmy Jack Cassie, also known as the Infant Prodigy, constantly translates Greek to Latin, as the pupils of the hedge school give etymologies of English words. ...read more.

This proves to be slightly ironic as the fact that the two soldiers are in Ireland to change the place names, yet they cannot even remember one mans name demonstrates how the British were seen as paying not much respect to the Irish community's culture. Owens identity is seemingly lost when he is called Roland, as we immediately assume that Roland is a different person, as that not being his real name gives him a feel of a lack of identity. Therefore, in the play of Translations, Brian Friel has tried to express the relationship between language and naming to culture and identity. He has done this by using people's names and the renaming process to express the way in which they react to place names being changed. He has shown how people's feelings of their identities change when their culture is altered, in this case, by the place names being made into English from Irish, so changing the feeling of the area in which most of them have spent all of their lives in. In this way for a lot of them, their identities are lost when things are changed in their settled lives. Alexandra Corbet-Milward Mrs Scanlon ...read more.

This essay shows a knowledge of theme, but needs to demonstrate it with closer attention to the text. Paragraphing should be more logical and could be helped by a better plan. ***