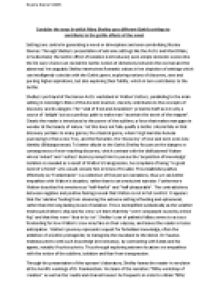 ﻿Neema Daniel 13AXS Consider the ways in which Mary Shelley uses different Gothic settings to contribute to the gothic effects of the novel Settings are central in generating a mood or atmosphere and even symbolising literary themes. Through Shelley?s presentation of extreme settings like the Arctic and Mont Blanc, in Switzerland, the Gothic effect of isolation is introduced; even simple domestic scenes like the De Lacy?s home can reveal the Gothic notion of dichotomy between the normal and the abnormal. Yet arguably Shelley intertwines Romantic values in her depiction of settings which can intelligently coincide with the Gothic genre, exploring notions of discovery, awe and pursing higher aspirations, but also exploring their futility, which in turn contributes to the Gothic. Shelley?s portrayal of the barren Arctic wasteland in Walton?s letters, paralleling to the main setting in Coleridge?s Rime of the Ancient mariner, cleverly contributes to the concepts of discovery and its dangers. The ?seat of frost and desolation? presents itself as not only a source of ?delight? but as a perilous path to make man ?ascertain the secret of the magnet?. Clearly the reader is introduced to the power of the sublime, a force that makes man gape in wonder at the beauty of nature. Yet this does not fully qualify a Gothic criteria fully in that discovery pertains to many genres, the classical genre; whom Virgil narrates Aeneas journeying to find a new Troy, and the Romantic, the ?discovery? of love and even ones new identity (Bildungsroman). ...read more.

His description of the ?intricacies of fibres, muscles and veins? reveal the sanguine nature of the task and intricacies suggests a delicate operation. Most important is Frankenstein?s reaction to his surroundings, for his ?limbs tremble? and his eyes ?swim with remembrance?. Evidently Shelley aims to ?curdle the blood and quicken the beatings of the heart?, through the presentation of horror which Gothic literature engages by exploring physical decay through images of death; ghosts, and cemeteries. In this instance the product of the workshop poses a threat to Frankenstein, evident through the imbalance of his psychological equilibrium as he invokes Rime of the Ancient mariner: ?Doth close behind him tread?. Thus the workshop qualifies the Gothic criteria by introducing horror, and his work reveals a danger, as Frankenstein believes the monster will terrorise him, having animated him. However Romantic values are evident in the presentation of the workshop, as it is a representation of a grand scientific achievement, satiating Dr Frankenstein?s ?ardent desire? to acquire knowledge by ?penetrating into the recess of nature?. Arguably the pursuit of knowledge outweighs Frankenstein?s repugnance at this creation as we learn an ?impulse urges him forward? and he displays an ?eagerness? to bring his work to a conclusion, by applying Galvani?s theory. Shelley appears to blur the notion of the sublime that it can appear from the most unlikely of sources. ...read more.

William dies at the monsters hands and is the first victim of his violent crusade against humanity. It is also, for Victor, a location of mystery, having been away in Ingolstadt we learn that the monster is sighted from behind ?a clump of trees near him?. The use of rhetorical questions, speculating the monsters responsibility for his death, immediately creates tension: ?What did him there?? Could he be???. The forest also explores the evil within humanity, as William hurls insulting epithets to the monster for his looks, calling him ?ogre? and ?hideous monster?. This evil among humanity is reflected in the prejudice of humanity even before William is murdered, as whilst roaming in the woods, the monsters benevolence of saving a drowning girl at a river is rewarded by a gunshot which agonies the monster and obliges the readers sympathy. Thus Shelley through the presentation of the woods blurs the binary of good and evil between humanity and the monster, through the portrayal of evil humans, which incurs the supernatural wrath of the monster. This parallels to Wuthering Heights in which the evil among humanity nurtures Heathcliff into a monstrous usurper. To conclude, Shelley intertwines Romantic and Gothic elements to her settings, but fundamentally each setting has a common Gothic trait, in that it reveals a danger or threat; an essential criteria for the Gothic genre. In each place, rest and escape from the extreme is futile. ...read more.