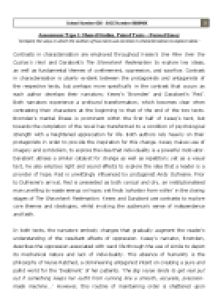 Contrasting Characterisation - One Flew Over The Cuckoo's Nest and Shawshank Redemption

﻿School Number 636 - SACE Number 868848X 3 Assessment Type 1: Shared Studies, Paired Texts ? Formal Essay ?Compare the ways in which the authors of two texts use contrast in characterisation to explore ideas.? Contrasts in characterisation are employed throughout Kesey?s One Flew Over the Cuckoo?s Nest and Darabont?s The Shawshank Redemption to explore key ideas, as well as fundamental themes of confinement, oppression, and sacrifice. Contrast in characterisation is plainly evident between the protagonists and antagonists of the respective texts, but perhaps more specifically in the contrast that occurs as each author develops their narrators; Kesey?s ?Bromden? and Darabont?s ?Red?. Both narrators experience a profound transformation, which becomes clear when contrasting their characters at the beginning to that of the end of the two texts. Bromden?s mental illness is prominent within the first half of Kesey?s text, but towards the completion of the novel has transformed to a condition of psychological strength with a heightened appreciation for life. Both authors rely heavily on their protagonists in order to provide the inspiration for this change. ...read more.

Darabont conveys Red?s aversion towards the notion of hope through the use of repetition, ?Hope? Let me tell you something, my friend. Hope is a dangerous thing. Hope can drive a man insane. It?s got no use on the inside. You better get used to that idea?. Kesey and Darabont both ensure that there is a prolonged contrast in the characterisation of their central characters, allowing the audience to appreciate the subtle but increasing influence over time that the two protagonists have on the narrators. Darabont relies on the use of his narrator, Red, similar to Kesey?s use of Bromden; primarily to explore fundamental ideas and themes of confinement and sacrifice. The audience grapples with the cruel nature of confinement based on Red?s recounts of his and Dufresne?s experiences in Shawshank prison. Additionally, it is conceded by Darabont that Red?s blatant rejection of hope is indicative of Shawshank Prison?s institutionalising effect, ?These walls are funny, first you hate them, then you start to get used to them. Eventually it gets so you rely on them. That?s institutionalised.? Dufresne unintentionally influences Red?s change in persona, which is quite unlike McMurphy?s extroverted behaviour in Kesey?s novel, ?Nobody?s sure ...read more.

Free. Nobody bothers coming after an AWOL, I knew?? Contrasting Bromden?s character from beginning to the end of One Flew Over the Cuckoo?s Nest allows the audience to examine Kesey?s idea that individuality is a powerful motivator. Darabont?s ideology that a leader is a provider of hope is portrayed through repetition, sound effects, and the contrast in Red?s character. Kesey and Darabont both present their respective ideas through contrast in characterisation, yet in very different ways. This disparity is primarily due to the difference in text types; resulting in Kesey?s reliance on the literary techniques of imagery and symbolism, and Darabont?s deliberate use of light and sound. Though the narrators are of critical importance in portraying their own transformations, the protagonists instigate the change and consequently develop the author?s ideologies with equal significance. One Flew Over the Cuckoo?s Nest and The Shawshank Redemption share a vast number of similarities in relation to their themes, whilst depicting divergent meaning due to the differing ideologies of the respective authors. Kesey?s and Darabont?s use of contrasts within the narrators supports the ideas present within the texts; allowing the audience to formulate their own beliefs about the importance of individuality and hope. Word Count ? 998 ...read more.