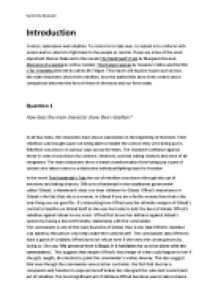 Control, submission and rebellion in the novels The Handmaids Tale by Margaret Atwood, Memoirs of a Geisha by Arthur Golden, The Hunger Games by Suzanne Collins and the film V for Vendetta.

﻿Sushmita Daswani Introduction Control, submission and rebellion. To control is to take over, to submit is to conform with orders and to rebel is to fight back to the people in control. These are a few of the most important themes featured in the novels The Handmaid?s Tale by Margaret Atwood, Memoirs of a Geisha by Arthur Golden, The Hunger Games by Suzanne Collins and the film V for Vendetta directed by James McTeigue. This report will explore issues such as how the main characters show their rebellion, how the authorities show their control and a comparison between the lives of those in the texts and our lives today. Question 1 How does the main character show their rebellion? In all four texts, the characters have shown submission in the beginning of the texts. Their rebellion was brought upon not being able to handle the control they were being put in. Rebellion was shown in various ways across the texts. The characters defiance against those in control was shown by violence, emotions, survival, taking chances and most of all vengeance. The main characters show a drastic transformation from being just a part of society who takes orders to a distinctive individual fighting back for freedom. In the novel The Handmaid?s Tale the act of rebellion was shown through the use of emotions and taking chances. Offred is a Handmaid in the totalitarian government called ?Gilead?; a Handmaid?s duty is to bear children for Gilead. Offred?s importance in Gilead is the fact that she is a woman, in Gilead if you are a fertile woman then that is the only thing you are good for. It?s interesting how Offred uses the ultimate weapon of Gilead?s control to backfire on Gilead itself as she uses her body to defy the laws of Gilead. Offred?s rebellion against Gilead is very ironic. Offred first shows her defiance against Gilead?s system by having a discreet friendly relationship with the commander. ...read more.

the purpose of the hungers games it to reward those who survive but really it is just a painful reminder of how much the Capitol controls the lives of the district people. In the novel Memoirs of a Geisha It is traditional for the ?Mother? to have total control of the Geisha?s earnings, social life, body and everything else. Sayuri is has been living in the same okiya since she was a child, except she started off as a slave. She eventually grew up and worked towards being a Geisha herself. Mother, the owner of the okiya shows her control over Sayuri by taking her right to love away from her, although it is not Mother?s complete will do this, she is in charge of making sure that a Geisha must keep to what tradition has placed them on. ?A Geisha is not to want. It is not for a Geisha to feel. Geisha is an artist of the floating world.? This quote said by Sayuri suggest that being a Geisha meant you are purely a means of entertainment and nothing else. Therefore to fall in love is just going to interfere with your purpose in life. Another way in which control is shown to the Geishas is by getting them to wear elaborate clothing, shoes, jewellery and very thick make up. These things make the Geisha very uncomfortable and no longer themselves as they are being hidden by the layers of clothing and make up. Sayuri says ?I became aware of all the magnificent silk wrapped around my body, and had the feeling I might drown in beauty, and had the feeling of beauty itself struck me as a kind of painful melancholy.? This suggest that all the things she must wear to prepare herself for a night of entertainment has made her feel overwhelmed and lonely at the same time because she does not feel like herself anymore. ...read more.

?In July 2011, a severe drought in Eastern Africa has caused thousands to die.? This shows that another main cause of famine in our time is caused by our ever changing climate. The author?s purpose in including poverty as a key issue in the novel is to generate a relationship between the extreme poverty that the districts encounter and the poverty that we encounter in reality. Thus might create some sort of awakening that will allow people of today to take care of our nature and learn to share our resources to those in need unlike the greedy people who live in the Capitol who can bear going through life while the rest of their country starves to death. All four texts show a close relation between the way of life in the texts and our lives in the present time. The similarities and differences we have from the texts are a way of reminding us of what good we have in our lives today compared to the characters in the texts. In the case of The Handmaid?s Tale and Memoirs of a Geisha show that what we have as women should be treated as very delicate gifts because one day we may turn out like Offred and Sayuri. With The Hunger Games, the close comparison between hunger in the districts and our world must serve as a wakeup call to those who are very wealthy to share their blessings to those who are in need. V for Vendetta shows us that Homosexuality is nothing to laugh about and is a very concerning subject as it one of the leading causes why people become depressed and suicidal. These aspects are ways of the authors to dig in to our minds as we view the texts and hopefully have an effect in our lives today so that we never end up in the position of the characters. Overall, the texts I have studied offer a broad range of insights regarding the theme of control, submission and rebellion. These texts show ...read more.