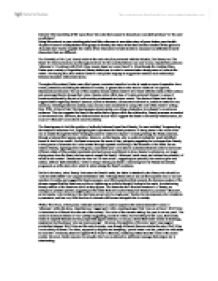 Extract: The Courtship of Mr Lyon from 'the voice that seemed to issue from a care full of echoes' to 'he went on all fours'. Using this extract as your starting point and this reference to one other story of your choice, you should: -Explore Carter's manipulation of language to develop the voice of the lion and the reaction of the girl to it. -Examine how Carter exploits the voices of her characters in both stories to comment on attitudes towards characters that are different. The Courtship of Mr Lyon loosely refers to the main storyline presented with the fairytale; The Beauty and The Beast. It is heavily feminine and throughout strives for the equality between men and women, despite their potential 'otherness's'. Combined with Wolf Alice, loosely based on Lewis Carroll's: Alice through the Looking Glass, Carter uses a variety of linguistics and literary techniques in order to communicate a strong sense of voice to the reader. Developing this, then enables Carter to manipulate language to suggest the reactions and relationships between characters within both stories. Throughout the extract, Carter uses a third person omniscient narrative in order to create a sense of separation from events, potentially mimicking the attitudes of society. ...read more.

The Beast sees the 'absolute sweetness' of Beauty, an ambiguous syntactic parallel, suggesting to the reader that not only the Beast, but Beauty too possesses 'otherness', as her beauty, 'who looked as if she had been carved out of a single pearl' hinders her development, she is treated as a possession, and has very little idea how to interact with humans alongside her in society. Within Wolf Alice, a third person restricted narrative is used to emphasise the central character's sense of 'otherness' within the story. Described as a 'ragged girl', with a 'panting tongue' that 'runs on all fours', Wolf Alice is introduced as different from the rest of the society. The voice of the narrator stating 'her pace is not our pace'. The inclusive audience address of 'our' perhaps suggesting, similar to within The Courtship Of Mr Lyon, that society wishes to separate themselves from people that appear different, or unique, a belief that Carter wishes to challenge, emphasised by the phrase; 'she was lonely enough'. However, the repetition of the lexis 'pace' may suggest similarities between Wolf Alice and the rest of society, even though different, there are similarities also, Wolf Alice is not entirely different. ...read more.

If they had been accepting and nurturing, the Duke may have been able to blossom and progress, yet their harsh, judgemental actions have secluded the Duke, leading him to live a primal life, no conscious present. However, throughout the story, Wolf Alice grows and matures from a child to a woman, gradually developing human-like characteristics, such as the need for hygiene, 'looking for rags to sop the blood up'. After meeting the Duke, Wolf Alice continues to progress and encourages the Duke to do so too. Finally, 'as if brought into being by her soft, moist, gentle tongue... the face of the Duke' appears in the mirror. The ideas of the story concluded, similar to The Courtship Of Mr Lyon, Wolf Alice and the Duke both accept their otherness, and encourage the other to do so. All are able to find happiness and live contently despite the views society may possess. Carter is suggesting that feminism does not mean a dominating sex, but equality between them, as each is equal within creation. In conclusion Carter's use of literary and linguistic techniques successfully portray the sense of voice and the reactions of characters within both stories to the idea of otherness. Her final ideas are concluded well within both stories, creating a clear message which resonates and questions the reader, encouraging them to consider their actions within a modern-day society. ...read more.