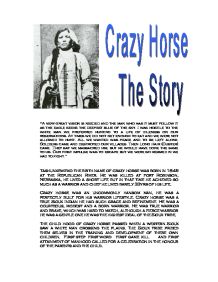 "A very great vision is needed and the man who has it must follow it as the eagle seeks the deepest blue of the sky. I was hostile to the white man...we preferred hunting to a life of idleness on our reservations. At times we did not get enough to eat and we were not allowed to hunt. All we wanted was peace and to be left alone. Soldiers came and destroyed our villages. Then Long Hair (Custer) came...They say we massacred him, but he would have done the same to us. Our first impulse was to escape but we were so hemmed in we had to fight." Tashunkewitko the birth name of crazy horse was born in 1845 at the Republican River. He was killed at fort Robinson, Nebraska, he lived a short life but in that time he achieved so much as a warrior and chief he lived barely 33yrs of his life. Crazy horse was an uncommonly hansom man, he was a perfectly built for his warrior lifestyle. Crazy horse was a true Sioux Indian he had such grace and refinement. He was a courteous, modest and a born warrior. He was true warrior and brave, which was hard to match, although a fierce warrior he was a gentle one he was the highest ideal of the Sioux tribe. ...read more.

At the fort Phil Keaney crazy hose was chosen to lead the attack against the woodchoppers. The strategy was to draw out the enemy then 600 Sioux warriors would attack, this succeeded as crazy horse had a lot of respect from his men so he had good control over there actions. Sitting bull and the Cheyenne chiefs admired him, On the 25 June 1876 crazy horse was watching a game of ring toss when a warning alarm of. Sioux and Cheyenne were 'minute men' (ready for every thing). Even though taken by surprise they shot up and got there favourite horse and went to fight. Women and children were confused as it all happened so fast; old men sang lodge songs to encourage the warriors and crazy horse. General Custer thought of an attack where both sides of the camp were attacked at the same time hopping that he would work his way into the middle. But crazy horse had seen this so he went to intercept Custer. In 1 minute crazy horse was to out smart Custer who was one of the most brilliant leaders in the civil war, Custer's military career and life was about to end. Here was crazy horse's most famous battle he and his warriors thought to every single white man was killed. Indians in reservations wanted crazy horse to come to fort Robinson but he refused. ...read more.