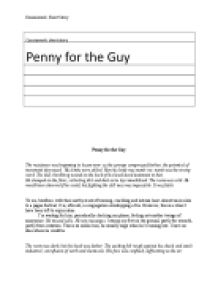 Creative writing - A Penny For The Guy

﻿Coursework: Short Story Coursework: short story Penny for the Guy Penny for the Guy The resistance was beginning to lessen now- as the syringe compressed further, the potential of movement decreased. His limbs were stilled. Now his body was numb- no- numb was the wrong word. The dull, throbbing wound on the back of his head stood testament to that. He slumped on the floor, collecting dirt and dust as he lay immobilised. The room was cold. He would have shivered if he could, but fighting the still ness was impossible. It was futile. To me, bonfires- with their earthy scent of burning, crackling and intense heat- almost seem akin to a pagan festival. It is, after all, a congregation worshipping a fire. However, this is a ritual I have been left to enjoy alone. I?m waiting for him, periodically checking my phone, feeling yet another twinge of annoyance. No missed calls. No new messages. I stamp my feet on the ground, partly for warmth, partly from irritation. This is so unlike him, he usually rings when he?s running late. I have no idea where he could be. The room was dark, but the hood was darker. The sacking felt rough against his cheek, and smelt industrial; an infusion of earth and chemicals. His face was confined, suffocating as the air around him dissipated. ...read more.

He is still not here- I?m angry now. I?m entertaining myself imagining all the things I will say to him when he arrives; all the ways I can accuse him of this selfishness. All the ways I can storm off, and all the ways he can follow me. At this point I?ve imagined five different ways he could apologise to me- I?m trying to decide which version I like best. It?s a hard decision. Of course, despite all the ways I?m hoping he will receive my anger, I know he won?t be apologetic. He?s the kind of man who refuses to admit that from time to time, he can be wrong. He will twist this argument back in my face, and once more, his tardiness will be my fault. Everything is my fault. I can only occupy myself with this for so long. For the umpteenth time, I gaze through the crowd, my eyes falling on sights I?ve already seen. Apart from one thing. I didn?t notice it before, it wasn?t visible from the other side. Slumped on the wooden decking is the bonfire?s guy. With its defined body shape, it is strikingly realistic, dressed all in black with dark sacking for a head. The workmanship of it is in some ways beautiful, but for some reason- and I can?t quite put my finger on why- I find it disturbing too. Less a sack of straw, more a bag of bones. ...read more.

The crowd goes wild. Everybody loves a bonfire. I stand alone, watching as the flames consume the wooden pallets from all sides. Soon the fire is roaring, a bright light against the bleak autumn sky. It?s a beautiful sight. Watching the dancing, ravenous flames, I?m no longer angry. I just miss him, I realise. I wish he was here. There was a time- and thankfully it came sooner rather than later- when his brain was not made predominantly of grey matter anymore. The percentage had been overturned by fire, and subsequently was no longer able to function as brains do. And so he lay in the flames, though there was little point in determining ?him? by a pronoun anymore- His body was also, predominantly, fire. The bones were being fast devoured by the flames, which were still ravenous. This consumption was accompanied by the raucous noises of the crowd, which had continued since the fire?s lighting. They cheered onwards, until all that was left was a little marrow, and ash. Overall, the townsfolk deemed the bonfire a success. It had been the largest fire to date, and had attracted the largest crowd on record. There was only one complaint, however. Some local residents reported a strange, persisting smell, which lingered in the area for some time afterwards. No one could quite put their finger on what it was. Many people blamed the bonfire?s caterers, accusing them of cooking something foul. However, in time the smell faded, and was forgotten. ...read more.