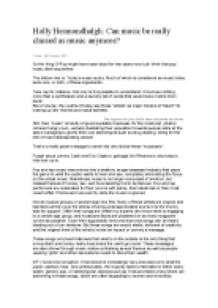 ﻿Holly Hesmondhalgh: Can music be really classed as music anymore? Friday, 28 October 2011 So the King Of Pop might have been dead for two years now, but I think that pop music died long before. The bottom line is: Today?s music sucks. Much of which is considered as music today lacks one, or both, of these ingredients. Take rap for instance. Not only is it impossible to understand, it involves nothing more than a synthesizer and a laundry list of words that would make Celine Dion blush. But of course, the youths of today see these ?artists? as major holders of ?talent? for making up dim rhymes and racial epithets. The disgrace of Lady GaGa been compared too Bowie. Still, their ?music? is hardly of good reputation because, for the most part, what is coherent angry men, verbally illustrating their opposition towards people while at the same managing to glorify their own stereotypes such as drug dealing, killing for the hell of it and disrespecting women. That is a really great message to send kids who idolize these ?musicians?. Forget about Johnny Cash and Eric Clapton, garbage like Rihanna is who today?s kids look up to. ...read more.

Why do most teenagers constantly listen to pop and rap music when so many other genres exist? Maybe it?s because everywhere we look, we are bombarded with same music: on the radio, on TV, on the computer. Perhaps they have never listened to anything else. Or maybe peer pressure is part of it. Another reason some people listen to popular music is because it is easy listening, with no abnormalities, since anything unique is considered weird. Unfortunately, there is no solution to the ?pop problem?. It called popular for a reason - many people enjoy it. My suggestions is to tell your kids to get off iTunes, turn Radio 1 off, and dig up some good old Bowie records, or maybe even some of The Smiths? Anything that will expand their horizons. You have to see eye to eye that in this day and age, the ways we use and buy our music has vastly altered over the past decade. Technology is evidently one of the biggest culprits. iTunes and Amazon have taken over how we now buy our music. But of course, it makes perfect sense. Why would you take the time to drive to your nearest shop, to buy an overpriced album, when you can buy, download and listen to it within 30 seconds? ...read more.

Contemporary pop isn?t very inspiring.? This show will be the death of the music industry as a whole. Unfortunately these artists that do win the X-Factor will never lose their tag. Everything was spoon fed to them and now they are in the big wide world they have no idea how to cope. What do we want? FAME! When do we want it? NOW! The youth of today are obsessed with the celebrity culture. It?s no surprise when they are continuously force fed by reality TV (which isn?t actually reality) such as Big Brother and again X-Factor. They have been brainwashed into believing that these are fast tracks into stardom. Where are the next Radiohead or Rolling Stones? These bands worked their butts off to get where they are now. Through hard work and talent. Not through phone votes. To quote The Who ?The Kids are Alright? I?m sorry Roger but they really aren?t. Where?s our Bob Dylan? Who?s standing up against the joke of a government we have? The youth are so god damn lazy it is unbelievable. We need to rebel. We need to become anarchist. At the end of the day, the music of today is such an embarrassment. Just ask yourself, what are we going to be look back on in 20 years? ...read more.