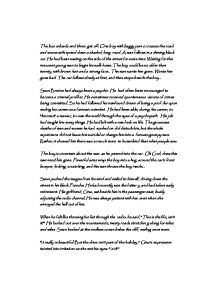 Creative writing - Sean Breton had always been a psychic. He had often been encouraged to become a criminal profiler.

The bus unloads and three get off. One boy with baggy jeans crosses the road and moves with speed down a shaded, long road. A man follows in a shining black car. He had been waiting on the side of the street for some time. Waiting for this innocent young man to begin his walk home. The boy could be no older than twenty, with brown hair and a strong face.. The man wants him gone. Wants him gone bad. The car follows slowly at first, and then stops beside the boy... Sean Breton had always been a psychic. He had often been encouraged to become a criminal profiler. He sometimes received spontaneous visions of crimes being committed. So he had followed his newfound dream of being a profiler upon ending his career as a forensic scientist. He had been able, during his career, to "become" a maniac, to view the world through the eyes of a psychopath. His job had taught him many things. He had left with a new look on life. The gruesome deaths of men and women he had worked on did disturb him, but the whole experience did not leave him suicidal or change him into a forever-grumpy man. ...read more.

. The man must now become violent in order to get his way. "Why?" kick, kick, punch, bite.. He looked at his wife, almost went off the road, and then once more maintained good steering. He felt her eyes on him, but he ignored it for the most part. He glanced over a few times but her eyes were glued to the road, and she was unknowingly humming the country tune on the radio. Sean hated country music. The boy is dead. The man-now a killer-cannot understand how the boy died. Maybe of fright. Maybe the beating. Maybe he would come back to life very soon. The killer's mind races as he thinks of a plan. He needs a plan. Sean was straining now to keep the thoughts away. The male voice of country music droned irritatingly like a broken banjo, making Sean's head throb. The killer's head throbs. He stands motionless. His mind blank. somewhere to store the body? Where can he put it? He attempts to check the time, becoming nervous, but his gold watch is gone! Where is it? His Girlfriend had given it to him two years ago and was sure to tell him she paid a lot of money for it. ...read more.

A tight squeeze to fit it in there but it works. He leaves with the suitcase and drives home, listening to Beethoven, worrying about his watch but letting the memories of what just happened ease...ease...ease...and they drift away almost completely. Almost... Back in the Porsche Gina glared at Sean. "What the hell was that about?" she wanted to know. "Keep your nose out of my business," Sean said, and turned the key in the ignition.Sean's business was finally taken care of. Perhaps now, he could enjoy the holiday to its full extent. Back on the main road, Gina said, "Hmm," and she tapped something on the dashboard. "It appears that this clock isn't working." Sean looked down and saw that in fact the digital display clock on the dash read 1:06am, which made no sense whatsoever as it could be no later than three o' clock in the afternoon, and the sun was still shining high in the sky. "I'll set it," Gina said, leaning forward with her finger poised before the buttons corresponding with the minutes and hours. "What time is it?" Sean kept driving. He steeled himself for his wife's fury and did not look at her when he said, "I don't know. I've lost my watch." ...read more.