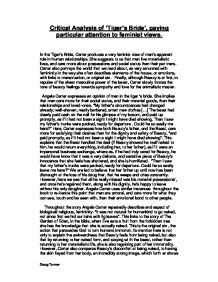 Critical Analysis of 'Tiger's Bride', paying particular attention to feminist views. In the Tiger's Bride, Carter produces a very feminist view of men's apparent role in human relationships. She suggests to us that men live materialistic lives, and care more about possessions and social status than their partners. Carter also portrays the world that we read about, as very saturated with femininity in the way she often describes elements of the house, or emotions, with links to menstruation, or original sin. Finally, although Beauty is at first, in repulse of the sheer masculine power of the beast, Carter slowly titrates the tone of beauty feelings towards sympathy and love for the animalistic master. Angela Carter expresses an opinion of men in the tiger's bride. She implies that men care more for their social status, and their material goods, than their relationships and loved-ones. "My father's circumstances had changed already; well-shaven, neatly barbered, smart new clothes [...] The beast had clearly paid cash on the nail for his glimpse of my bosom, and paid up promptly, as if it had not been a sight I might have died showing. ...read more.

Angela Carter uses similar instances throughout the book to re-iterate this point that men are amoral, and care more for what they can see, touch and be seen with, than their emotional bond to other people. Throughout the story Angela Carter repeatedly describes and aspect of biological/ religious, femininity. "It was not natural for humankind to go naked, not since first we hid our loins with fig leaves". This links to the story of The Garden of Eden, in the bible, when Eve eats a fruit from the forbidden tree she has the knowledge that she is actually naked. This is the original sin, the action that persuades God to turn humans immortal. Its mention here is not only to explain the awkwardness that Beauty feels from being naked, but also that by returning to her naked form, and staying with the beast, rather than returning to her materialistic life, she is also regaining part of her immortality. However, Carter also compares Beauty's discomfort at being naked, to having the skin flayed from her body, an incredibly strong image, which further shows the pain in which Beauty went to show the Beast her body originally. ...read more.

This shows the trust that Beauty now has in the Beast, how she feels enough belief in his love for her, to offer herself to him, and be safe in the knowledge that he will not devour her, and that they will both be able to live in a paradise. Even when Beauty exclaims that "[The Beast] will lick the skin off me!" it is not an exclamation of fright, disgust, or pain, but more like an orgasmic frisson at the utter power that the Beast has over her. The last sentence "My earrings turned back to water and trickled down my shoulders; I shrugged the drops off my beautiful fur." Shows the change that Beauty has gone through within only this scene. Both physically and emotionally Beauty has reverted back to her natural form. She now feels beautifully, comfortable, both naked, and in the form of what she originally thought was a fearsome beast. Angela Carter uses role reversal from the basis of the fairy tale 'Beauty and the Beast' to put both characters within a comfortable state, where they can love each other, but in this versions, the Beauty, has learnt lessons of humility, and love from the masculine Beast. ?? ?? ?? ?? Doug Turner ...read more.

This essay responds averagely to the prompt of exploring feminist views. Many of Angela Carter's short stories seek to express females in literature in a different light, and I liked how this essay is able to explore how this is ...

This essay responds averagely to the prompt of exploring feminist views. Many of Angela Carter's short stories seek to express females in literature in a different light, and I liked how this essay is able to explore how this is achieved. I would've liked to have seen more discussion around what effect the short story has, as there is strong analysis around the metamorphosis and relationship with The Beast, but little explanation of why this is used. Higher level marks in A-Level are dependent on such discussions of the authorial intent.

The analysis in this essay is good, but there could be more focus on the significance of the narrative on feminist views. I would note that there are a few instances where the quotes used are much too long. Using short quotes which are embedded in your essay will allow you to focus on specific techniques and really pick apart the language Carter is using. There needs to be more discussion around points such as "but in this versions, the Beauty, has learnt lessons of humility, and love from the masculine Beast." I would be asking myself: Why has Carter done this? Is this significant to her feminist agenda? A key aspect of Carter's short stories is the presentation of the rewards which can be gained from aspiring beyond limitation. The girl is lost by her father in the first sentence, yet Carter uses her as a first person narrator to reject society and be liberated. Discussion around this idea would've brought this essay into higher grades.

The tone here is good, and I particularly like the critical voice which is expressed. I would note that you don't need to refer to the author by their full name every time. Beginning the essay with Angela Carter in the first instance, and then using Carter from then on is fine. The essay is able to weave in ideas of the gothic well, yet sometimes these points are more akin to assertions rather than thorough analysis. I would note that the female in this short story isn't called Beauty.