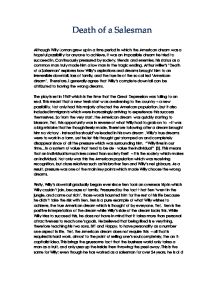 Death of a Salesman Although Willy Loman grew up in a time period in which the American dream was a hopeful possibility for anyone to achieve, it was an impossible dream he tried to succeed in. Continuously pressured by society, friends and enemies, his status as a common man truly made him a low man in the tragic ending. Arthur Miller's 'Death of a Salesman' explores how Willy's aspirations and dreams brought him to an irreversible downfall, loss of family, and the true lie of the so called 'American dream'. Therefore, I generally agree that Willy's complete downfall can be attributed to having the wrong dreams. The play is set in 1949 which is the time that the Great Depression was falling to an end. This meant that a new fresh start was awakening to the country - a new possibility. Not only had this majorly affected the American population, but it also included immigrants which were increasingly arriving to experience this success themselves. So from the very start, the American dream was quickly starting to blossom. Yet, this opportunity was in reverse of what Willy had to grab on to - it was a big mistake that he thoughtlessly made. ...read more.

Since his career as a salesman was reaching nowhere, he forced his son Biff to realize that he could make it also, 'just like his dad'. Therefore, Biff followed Willy in reaching the dream and believed that anything and everything is possible what Willy said. Yet, this changed at the point in which he saw Willy cheating on his wife, with the woman. Until that very moment, Biff believed in his dad and could've even had much more success than him. But right after he saw what had happened, everything disappeared; his dreams crumbled like a brick wall - once so stable, now nothing. From that time, Biff couldn't talk to his dad closely, thus Willy made up that closeness. Willy kept repeatedly thinking that Biff could reach the dream that he wanted a decade ago. As a result, Willy's wrong dreams were not only affected himself, but also his family. Whenever Biff wanted to talk to Willy about his present job, Willy deliberately made Biff lie to himself that he is reaching the peak of his 'dream' career. However, Biff was just like his dad - a follower, but could've been a leader. ...read more.

However, even though he had possibly worked for the wrong company, there were no obstacles which were stopping him from reaching his desired dreams. This has also been mentioned by the government, which stated that it's not the governments fault for the downfall of one's dream. In my opinion, Willy is the one to blame for his wrong dreams, and not society. This is because he chose to follow the American dream; there was no force. If society was to blame for his downfall, then there must've been a pressure by society to force people to reach the American dream. Yet, it is a person who decides whether to follow what they want, or not. And in this case, Willy had followed his wanted dream and ended up nowhere - only experiencing a downfall. In conclusion, I agree altogether that Willy chose the wrong dreams to have aspirations for. There were other ways of him reaching his own American dream, yet following to be a salesman led to nothing but complete permanent downfall. Even though he still would've been a common man, he would have had the happiness and love which was missing from his life. Therefore, for choosing the wrong dreams, his downfall is irreversible and there's no way turning back, even after all the chances he had. ...read more.