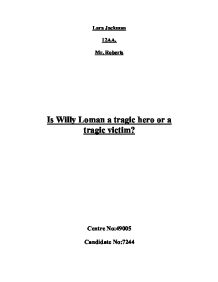 Death of a Salesman: Is Willy Loman a tragic hero or a tragic victim?

Lara Jackman 12AA. Mr. Roberts Is Willy Loman a tragic hero or a tragic victim? Centre No:49005 Candidate No:7244 The "quintessential American tragic hero"1 or "a passive victim of corrupted propagandist society"2; this is just one example of the conflicting views surrounding Arthur Miller's Willy Loman in "Death of a Salesman". Consumed with a flawed vision of the American Dream, this character is certainly a contemporary figure and his life remains symbolic and relevant to this day with regards to the pitfalls of capitalist values, as it was fifty years ago. Indeed, Willy Loman is unique in the sense that it is difficult to categorise him as one particular character stereotype; it depends on the individual's point of view. Some critics argue that he is neither a tragic hero or victim, but rather a "victimizer of himself and others"3 and "a coward"4. Certainly, there are numerous interpretations that have been explored over the years and it is due to the wide scope for analysis Willy offers that "Death of a Salesman" remains a favourite to discuss amongst critics to the present day. The idea of Willy Loman as a "tragic hero" has been the subject of heated debate for decades. Some of the classic features of a tragic hero, as determined by Aristotle, can undoubtedly be applied to Willy Loman and therefore support the idea of a heroic character. ...read more.

An example of this is Othello's realisation that he had been fooled into a jealous rage by Iago, leading to the murder of Desdemona, when he speaks of himself as "one that loved not wisely, but too well." He recognises his hamartia. Contrary to this, Willy dies just as disillusioned as ever, clutching on to his skewed values until the end: "Can you imagine that magnificence with twenty-thousand dollars in his pocket?" He never questions his blind vision of material success; indeed his hopes for Biff are all centred around the same dream that proved so empty for him. On top of this, the values he holds on to are shallow because hi struggle is for material gain and recognition; he does not strive for truth or honour for example. Although it could be said that Shakespeare's Hamlet possesses similar faults at the beginning of the play, he manages to outgrow them. Willy on the other hand, never does. In this way, Willy Loman does not fit this particular aspect of a tragic hero. It could also be argued that Willy Loman is a victim of capitalist society; in particular the American Dream. One of the elements of "Death of a Salesman" that supports this notion is the setting itself. ...read more.

Also, in declining Charley's job offer Willy Loman casts his family's needs aside because it does not live up to his ideal job. Although the term "villain" may be a bit harsh, it is certainly true that the shortcomings of his personality make Willy a harder character to sympathise with than Sophocles's Oedipus for example. In this way he could be considered neither a hero nor a victim, because a tragic victim generally needs to arouse high compassion amongst audiences. To conclude, it seems as if the character of Willy Loman is most accurately described as an "anti-hero". This is because, although he is the protagonist of the play, he lacks many of the traditional qualities of a true tragic hero; Miller has subverted this stereotype in creating Willy Loman. More importantly however, audiences would certainly not wish t to be like him in any way, although there are undoubtedly aspects of Willy's personality that we can relate to. As Joyce Carol Oates suggests: "For all his delusions and intellectual limitations...Willy Loman is all of us. Or, rather, we are Willy Loman, particularly those of us who are writers, poets, dreamers; the yearning soul "way out there in the blue."1 Nevertheless, Willy does still possess some of the attributes of Aristotle's typical tragic hero as previously mentioned, which means he cannot be considered a total victim either. The only certainty is that critics will continue to ponder over Willy Loman's character for years to come. ...read more.

This essay is a superb example of how to tackle tragic discussions, looking closely at a number of critical interpretations whilst always staying focused on the text. I like this question as it forces you to engage closely with the ...

This essay is a superb example of how to tackle tragic discussions, looking closely at a number of critical interpretations whilst always staying focused on the text. I like this question as it forces you to engage closely with the characteristics of a hero and villain, and this essay manages this well through a strong knowledge of the text.

The analysis here is strong. There is a sustained focus on tragedy, and the use of technical terms such as hubris and hamartia will be rewarded by examiners. I think when referring to the text, this could be done with slightly more sophistication. For example "Willy's comparison of his suicide to a diamond" could be better phrased as "Miller has Willy compare his suicide to a diamond" which allows a natural progression into discussion the techniques used. The one thing this essay lacks is a discussion of why Miller has constructed Willy as a tragic hero or tragic victim. By exploring how the audience respond to either traits, this essay would be reaching higher marks.

The critical voice here is brilliant. Phrases such as "more importantly however" and "the only certainty" show the ability to evaluative interpretations and meanings to determine which are most significant. Referencing is done well, and the use of a variety of critical interpretations allows for a well researched argument. The structure is good, having an introduction which really engages with tragedy, and a conclusion which provides an insightful ending by drawing upon previous analysis. Spelling, punctuation and grammar are flawless.