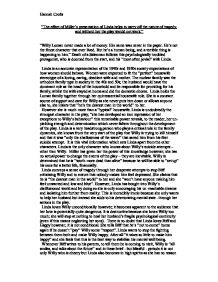 Death of a Salesman. The effect of Millers presentation of Linda helps to carry off the nature of tragedy, and without her the play would not work.

"The effect of Miller's presentation of Linda helps to carry off the nature of tragedy, and without her the play would not work." "Willy Loman never made a lot of money. His name was never in the paper. He's not the finest character that ever lived. But he's a human being, and a terrible thing is happening to him." Death of a Salesman follows this psychologically troubled protagonist, who is doomed from the start, and his "most often jovial" wife Linda. Linda is an accurate representation of the 1940s and 1950s society expectations of how women should behave. Women were expected to fit the "perfect" housewife stereotype of a loving, caring, obedient wife and mother. The nuclear family was the orthodox family type in society in the 40s and 50s; the husband would have the dominant role as the head of the household and be responsible for providing for his family, whilst the wife stayed at home and did the domestic chores. Linda holds the Loman family together through her quintessential housewife role. She is a constant source of support and care for Willy as she never puts him down or allows anyone else to, she insists that "he's the dearest man in the world" to her. ...read more.

Similarly, Linda shares this idea because she feels powerless to stop the suicide, so instead she wants to make sure that Willy is content and achieves his final desires. However, unlike Dave Singleman Willy is cast aside and let down by society and after his death only his sons, wife and two neighbours attend his funeral. The final scene is intensely tragic with Linda's prose channelling the majority of this unfortunate calamity. She "stares at the grave" unable to let go of the past and hysterically begins to talk to Willy. Finding it impossible to cry she asks him to "help" her. Linda is clearly sad that Willy is dead however she is unsure why he committed suicide - she asks him; "Why did you ever do that?" - because of her uncertainty over his motives for suicide she doesn't know why or what she should cry for. The prominent concern troubling Linda is the fact that she "never had a chance to say goodbye", by not having this opportunity she will forever be troubled by this lost chance and this is excruciatingly heartbreaking for an audience to watch. Aristotle, a Greek philosopher, discussed the concept behind tragedy in his work - "Poetics". Aristotle's theories on tragedy influenced playwrights not just in his time but even Shakespeare and more modern tragedy writers of our own time, such as Arthur Miller. ...read more.

She is an inspiration to anyone who watches it as they will see how an ordinary housewife manages to deal with the breakdown of her family and still has both oars in the water. Even when she is faced with an obnoxious husband she never gives up - unlike Willy - and she still remains loyal to him after his selfish suicide. She calls him "Willy, dear" which shows that even after everything she has been through she forgives him, and most importantly "she more than love's him she admires him" for all his big dreams (after all he was only a "little boat looking for a harbour"). However, Linda is not completely perfect and she, like the other characters, has flaws. She believes that the American dream will bring the whole family together but it is actually pushing them all apart - and is the main reason for Willy's death. Ironically Linda and Willy are working against each other (even though they do not realise it), this is obvious throughout the course of the play particularly in the beginning of Act two when Linda is dressing him and the stage directions describe how she is: "buttoning up his jacket as he unbuttons it". Miller's portrayal of Linda as a strong but softly spoken character is crucial to her carrying off the nature of tragedy effectively. WORD COUNT: 1,685 ?? ?? ?? ?? Hannah Crofts ...read more.