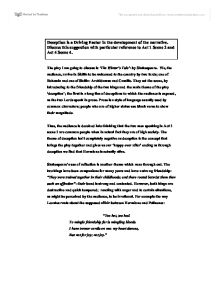 Deception is a Driving Factor in the development of the narrative. Discuss this suggestion with particular reference to Act 1 Scene 2 and Act 4 Scene 4.

Deception is a Driving Factor in the development of the narrative. Discuss this suggestion with particular reference to Act 1 Scene 2 and Act 4 Scene 4. The play I am going to discuss is 'The Winter's Tale': by Shakespeare. We, the audience, arrive in Sicilia to be welcomed to the country by two lords; one of Bohemia and one of Sicilia: Archidamus and Camillo. They set the scene, by introducing to the friendship of the two kings and the main theme of the play 'deception'; the first in a long line of deceptions to which the audience is exposed, as the two Lords speak in prose. Prose is a style of language usually used by common characters; people who are of higher status use blank verse to show their magnitude. Thus, the audience is deceived into thinking that the two men speaking in Act 1 scene 1 are common people when in actual fact they are of high society. The theme of deception isn't completely negative as deception is the concept that brings the play together and gives us our 'happy ever after' ending as through deception we find that Hermione is actually alive. Shakespeare's use of reflection is another theme which runs through out. ...read more.

The contemporary audience would have been inclined to believe that Leontes' descent into madness was a result of some punishment from the gods; with love this strong and intense it was not unusual that the relationship could be exposed to betrayal and loss. The sudden onset of madness would be unfortunate, but all too common and adds to the mystery for the audience. However, a modern audience would need to find some plausible explanation: Hermione is in the late stages of her pregnancy, Leontes is probably suffering from lack of intimacy which might have lead to sexual frustration and adds to the feeling of neglect he is experiencing. Leontes doesn't feel secure in his relationships with his wife and best friend, Polixenes and so he begins to believe that Hermione and Polixnes are having an affair. When Hermione manages to persuade Polixenes herself, Leontes' pride is hurt and this adds to his suspicions which spark his rage and descent into madness. The reason for the reflection in character between Leontes and Polixenes lies in the childhood friendship between the two kings which leads me to consider the state of mind of the two kings; reflected in their use of language and the break down of their speech pattern. ...read more.

Another factor to be remembered is that there were no other characters to affect the two kings' decisions - only they are to blame. Polixenes also learns a lesson within the play. He loses his temper when he goes in disguise to the sheep shearing festival and discovers that Florizel plans to marry Perdita who at the time was thought to be the son of a shepherd. Polixenes believes that she isn't good enough for his son based on her class and heritage alone. Little does Polixenes know that she is in fact the daughter of Leontes. Polixenes learns at the end of the play that deception and pompousness leads to bad consequences and that you shouldn't judge a book by its cover. Over all Shakespeare tries to convey the message that power isn't everything and asserting your superiority doesn't always get you what you want. When Leontes finally realises the error of his ways the madness will disappear as quickly as it had seized him. Shakespeare's plays are concerned with the audience's responses to and interpretations of them. This I believe is what makes them plays that can be enjoyed and studied by anyone from any time period - interpret them in their own way which can be very different: as we see in the case of the Elizabethan and modern day interpretations of Leontes' descent into madness. ...read more.