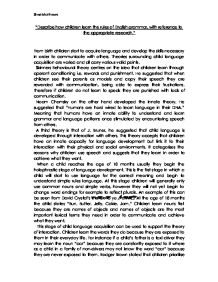 Describe how children learn the rules of English grammar, with reference to the appropriate research

"Describe how children learn the rules of English grammar, with reference to the appropriate research." From birth children start to acquire language and develop the skills necessary in order to communicate with others. Theories surrounding child language acquisition are varied and all carry various valid points. Skinners Behavioural theory centres on the idea that children learn through operant conditioning i.e. rewards and punishment. He suggested that when children see their parents as models and copy their speech they are rewarded with communication, being able to express their frustrations. Therefore if children do not learn to speak they are punished with lack of communication. Noam Chomsky on the other hand developed the innate theory. He suggested that "Humans are hard wired to learn language in their DNA." Meaning that humans have an innate ability to understand and learn grammar and language patterns once stimulated by encountering speech from others. A third theory is that of J. Bruner, he suggested that child language is developed through interaction with others. This theory accepts that children have an innate capacity for language development but link it to their interaction with their physical and social environments. It categorises the reasons why children use speech and suggests that they learn in order to achieve what they want. ...read more.

a child in a country that does not use the phoneme "ch" will not therefore need to use it, thus when they are older they will find it impossible to be able to make that sound again. This is called phonemic contraction. When a child reaches the age of 2 1/2 years they begin to build up their grammar. As well as still using nouns and verbs they begin to develop a use of prepositions and pronouns. An example of this can be seen in A child's learning of English by Paul Fletcher. At 2 1/2 years old the child states "me want to read that" The pronoun "me" is used in this sentence showing an understanding of self awareness. However they have over generalised the use of "me" showing a lack of understanding of what pronoun is appropriate. In the same conversation the child states "Muffy step on that." The preposition "on" is used, this shows a more developed understanding of grammar and word classes because the child is using words to link verbs and nouns. However this sentence also shows how at this age children are still unable to understand the use of tenses. ...read more.

This could provide support for the Behavioural theory of Child Language Acquisition. From this example we can see that children have learnt the behaviour, in that they have learnt the "ed" means that something was done in the past. And because they have been rewarded with communication they have assumed that everything they talk about that has already happened should have an "ed" on the end. Children seem to learn incredibly complex and complicated languages very quickly and with relative ease, the rate at which they learn under the age of five is second to none other age. The theories surrounding how children learn language a varied and all have good points however they all have their flaws also. Perhaps a mixture of the all is a better way to explain how children learn, children must have some sort of innate ability that allows them to understand the rules of language. While at the same time the language used around them and the way they interact with other people also must influence they way they speak, otherwise why would we have regional language differences? Furthermore Skinners Behaviourist theory also makes sense as children learn more language they are rewarded with being able to communicate with others thus ridding themselves of the frustration they must feel when not able to express themselves. ?? ?? ?? ?? Sheri Matthews ...read more.