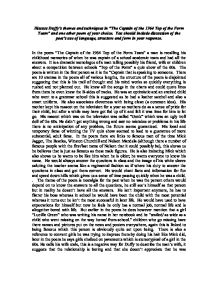 Discuss Duffy's themes and techniques in &quot;The Captain of the 1964 Top of the Form Team&quot; and one other poem of your choice. You should include discussion of the poet's use of language, structure and form in your response.

Discuss Duffy's themes and techniques in "The Captain of the 1964 Top of the Form Team" and one other poem of your choice. You should include discussion of the poet's use of language, structure and form in your response. In the poem "The Captain of the 1964 Top of the Form Team" a man is recalling his childhood memories of when he was captain of a school academic team and had all the answers. It is a dramatic monologue of a man telling possibly his friend, wife or children about a competition between schools "Top of the Form" a quiz show of the 60s. The poem is written in the first person as it is the "Captain that is speaking to someone. There are 10 stanzas in the poem all of various lengths, the structure of the poem is disjointed suggesting that this is his trail of thought and his mind works so quickly everything is rushed and not planned out. He knew all the songs in the charts and could quote lines from them he even knew the B-sides of tracks. He was an optimistic and an excited child who went to a grammar school this is suggested as he had a leather satchel and also a smart uniform. He also associates cleverness with being clean (a common idea). ...read more.

He still tries to know it all but he feels more at home in the past and doesn't fit into the present day, he finds that things have got more difficult with age and feels he has used up all his chances and time in life. "I want it back." Is probably the strongest line of the poem it is short and to the point, he misses the way his life once was when he was a child who knew everything and wants it back. In the poem he is always listing things he knows, which shows us he learnt all the facts and figures and has kept them stored away as lists which he can retrieve at any time. Duffy uses the words "My country" a lot and gives them there own sentence, this could mean that he dislikes the way the country is now being run or could mean that in the past he felt like he was King and he ruled the time back when he was the captain. In the poem "Nostalgia" Duffy tells us about the pain of returning to a place you no longer belong, after you've been missing it so much it "made you ill". ...read more.

it could also be the things the people who had kept their distance due to hearing of it thought they should feel if they were experiencing it. Duffy then tells us that if you didn't know what the word love meant how could you experience it? Then Duffy gives us examples of people trying to relive or expand their past, this now brings in the theme of time making this illness incurable as you can not control time, she does this by saying "through the colour of leaves," which can also refer to autumn when the leaves change colour but then die. The last part of the final stanza describes one of the mercenaries from the beginning of the poem who has now returned home. This should cure his illness but now as time plays a part it doesn't work the physical aspects of the town are the same, but while you were away time has moved on although Duffy using spring which normally a new start and happy it is not that case in this particular poem. Also with Time there is no possibility of return, things changes, even without the action of one person. Both these poems deal with the theme of nostalgia, missing a past time or place and they both long for "their country" in a sense. ...read more.