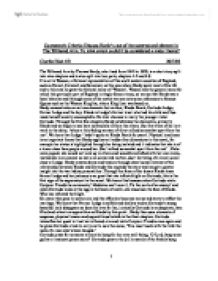 Discuss Hardy's use of the supernatural element in The Withered Arm. To what extent could it be considered a major theme?

Coursework Criteria: Discuss Hardy's use of the supernatural element in The Withered Arm. To what extent could it be considered a major theme? Charlie High 4B 20/7/03 The Withered Arm by Thomas Hardy, who lived from 1840 to 1928, is a short story split into nine chapters and is also split into two parts, chapters 1-5 and 6-9. It is set in Wessex, a fictional representation of the south western counties of England, such as Dorset, Cornwall and Somerset, as this was where Hardy spent most of his life and to this area he gave the fictional name of 'Wessex'. Wessex was the general name for which this particular part of England in Anglo-Saxon times, so we see that Hardy was a keen historian and through some of his novels we can note some references to famous figures such as the Wessex King Ina, whom King Lear was based on. Hardy concentrates on not one character but on four, Rhoda Brook, Gertrude Lodge, Farmer Lodge and the boy. Rhoda is Lodge's former lover who had his child and thus made herself socially unacceptable. He later chooses to marry the younger richer Gertrude. Through the first few chapters Hardy establishes the characters, primarily Rhoda and we begin to see how isolated she is from the others. Our first view of her is at work in the dairy, 'where a thin fading woman of thirty milked somewhat apart from the rest'. ...read more.

The supernatural theme is cleverly applied by Hardy in the Withered Arm, through setting, actions, history and speech. The setting for most of the story, Egdon Heath, derived from an isolated building on the edge of a tract of wild heath land near where Hardy lived. Egdon Heath seems to have an eerie feeling to it and a character of its own .'Egdon Heath whose dark countenance was visible in the distance as they drew nigh to their home' and 'It was a long walk; thick clouds made the atmosphere dark, though it was as yet only early afternoon; and the wind howled dismally over the slopes of the heath- not improbably the same heath which had witnesses the agony of the Wessex King Ina, presented to after- ages as Lear.' Here Hardy cleverly uses the mystical and dark feeling off the heath with historical content -King Lear could be compared to Gertrude or Rhoda as they are both very tragic figures, who are both afflicted by hatred which becomes a type of madness or obsession. The description of the Heath is very mystical and it seems to be a place which only a few people cross on a pilgrimage to see Conjuror Trendle . Conjuror Trendle is another example of the supernatural that Hardy has applied to the novel. Trendle is a magic man and the fact that Gertrude did not choose to go to a normal doctor is quite mysterious, she only turns to him when she is desperate. ...read more.

I do not believe that Gertrude's or Rhoda's fate was deserved. They were dragged into the situation by Farmer Lodge's selfishness, he gave up everything he wanted with Rhoda due to class difference and brought the son into the world who eventually became a victim. Farmer Lodge then married Gertrude and added to her downfall by disliking her because of her looks-disability, consequently killing her as she tried to find a cure for her arm. The son was the most innocent victim and was accused for a crime he didn't commit. Overall only Farmer Lodge deserved his death. In conclusion I think there is enough evidence in the novel to suggest that the supernatural element is a major theme in the Withered Arm. The supernatural element adds controversy and provides excitement and a backbone to the story, what Hardy does well is to imply that the supernatural might be at work, he never directly states that it is . Therefore we can make up our own mines. I must also consider that there must have been a reason for Rhoda to want to put a curse on Gertrude and that is basically that she has been supplanted by a younger rival. She wants to get revenge and sees this as a way to do so. Throughout the story we never see much hope and the tone of the story is dark and mysterious, it must be then that Hardy wanted the story and the characters to revolve around the supernatural element. 1 ...read more.