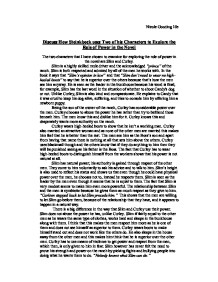 Nicole Gooding 10e Discuss How Steinkbeck uses Two of his Characters to Explore the Role of Power in the Novel The two characters that I have chosen to examine for exploring the role of power in the novel are Slim and Curley. Slim is a highly skilled mule driver and the acknowledged "prince" of the ranch. Slim is both respected and admired by all of the men he works with. In the book it says that "Slim's opinion in law" and that "Slim don't need to wear no high-heeled boots" to say that he is superior over the others because that's how the men see him anyway. He is seen as the leader in the bunkhouse because his word is final, for example, Slim has the last word in the situation of whether to shoot Candy's dog or not. Unlike Curley, Slim is also kind and compassionate. He explains to Candy that it was cruel to keep his dog alive, suffering, and tries to console him by offering him a newborn puppy. ...read more.

The fact that Slim is very modest seems to make him even more powerful. The relationship between Slim and the men is symbiotic because he gives them as much respect as they give to him. "Carlson stepped back to let Slim precede him." This shows that the men are willing to let Slim go before them, because of the relationship that they have, and it appears to happen in a natural way. There is a big difference in the way that Slim and Curley use their power. Slim does not abuse the power he has, unlike Curley. Slim if fairly equal to the other men as he wears the same type of clothes, works hard and sleeps in the bunkhouse along with them. I think that this makes the men respect him more as he is one of them and does not see himself as superior to them. Curley wears boots to make himself stand out and does not work like the others do. ...read more.

We are told that Slim is a "hell of a nice fella" and the men feel that they can easily trust him. Slims trustworthiness in the eyes of the men can be seen in this quote:"You wouldn' tell? - no, course you wouldn'." In the novel I see Curley as a dictator figure because he is a bully who abuses the power that he is given. I think that Steinbeck is trying to say that if you abuse the power that you have, you will not be able to maintain it but you will end up loosing it all. This can be seen throughout the novel when Slim gives the men as much respect as they give him and therefore he is rewarded for the way he uses his power by maintaining his position of authority. However, Curley abuses his power and therefore he undermines the position he holds on the ranch. The novel hence presents itself as a moral tale that explores the uses and abuses of power and the effect that this has in society. ...read more.