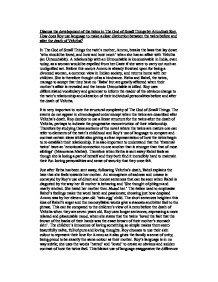 Discuss the development of the twins in The God of Small Things by Arundhati Roy. How does

Discuss the development of the twins in The God of Small Things by Arundhati Roy. How does Roy use language to make a clear distinction between the twins before and after the death of Velutha? In The God of Small Things the twin's mother, Ammu, breaks the laws that lay down 'who should be loved, and how and how much' when she has an affair with Velutha (an Untouchable). A relationship with an Untouchable is inconceivable in India, even today, as a woman would be expelled from her Caste if she were to carry out such an undignified act. Before this occurs Ammu is already frowned upon for being a divorced woman, a common view in Indian society, and returns home with her children. She is therefore thought of as a hindrance. Estha and Rahel, the twins, manage to accept that they have no 'Baba' but are greatly affected when their mother's affair is revealed and the heroic Untouchable is killed. Roy uses differentiated vocabulary and grammar to inform the reader of the obvious change to the twin's relationship and alteration of their individual personalities before and after the death of Velutha. It is very important to note the structural complexity of The God of Small Things. The events do not appear in chronological order except when the twins are described after Velutha's death. Roy decides to use a linear structure for the twins after the death of Velutha, perhaps to indicate the progressive reconstruction of their relationship. Therefore by studying these sections of the novel where the twins are mature one can refer to elements of the twin's childhood and Roy's use of language to compare and contrast certain ideas whilst also giving a clear representation of how the twins begin to re-establish their relationship. ...read more.

Shoes arranged. The dustbin empty'. This description of Estha's room gives the reader an impression of order and organisation. Roy uses the same technique towards the end of this description of Estha and Rahel; 'A raindrop glistened on the end of Estha's earlobe. Thick, silver in the light, like a heavy bead of mercury. She reached out. Touched it. Took it away'. This passage is made very poignant and emotional. The fact that this is the first time that the two have touched each other since Estha was sent away and they are therefore both deeply aware of this physical contact, and both have ambiguous feelings about the encounter, is made obvious by the author. Roy uses a 'raindrop [that] glistened' to be on Estha's earlobe. This is a precious and delicate symbol, representing the moment that the twins are experiencing. By using alliteration in the letter T, a harsh sounding consonant, Roy manages to show how such a simple and kind action is perceived differently by Estha when he 'didn't look at her. He retreated into further stillness'. Roy uses a parallel between this bathroom scene and another bathroom scene, which takes place previous to Velutha's death, and in doing so manages to clearly contrast the two different atmospheres. In the earlier bathroom scene, chronologically speaking, a light-hearted mood of enjoyment is expressed by Roy when she states that 'Rahel giggled. Ammu giggled. Baby Kochamma giggled'. Instead of using poetical language here the author uses factual language to create straightforward accounts of the situation, which often result in comedy. For example there is a description of Baby Kochamma in the toilette; she 'waited for half a moment. ...read more.

Rahel has just been told off by Ammu, and Estha is, during the day, sexually abused by the 'orange-drink-lemon-drink-man'. They therefore need comfort from one another but are forced to sleep in separate rooms. Roy uses language to create an atmosphere of silence and distress when Estha 'stood quietly outside Rahel's door' and without any words or signs Rahel 'stood on a chair and unlatched the door for him'. This atmosphere is continued when the two characters 'slept with their arms around each other......Somehow not wholly unaware of the hint of doom and all that waited in the wings for them'. This directly compares to the final twin scene as the twins do not speak about their feelings or emotions and this same distressing atmosphere is created when Roy explains that 'what they shared that night was not happiness but hideous grief'. From these parallel scenes we compare the adult, sexual twins to the young, non-sexualised twins and in this way recognise in what way these characters have changed. It is certainly true that 'the great pleasure of The God of Small Things flows from its language' (Wood). Roy's use of words, images and symbols makes us constantly compare the younger and older relationship of the twins so we can understand its development and the change that occurs. It appears that the twins are attempting to regain what they once had and are able to mysteriously feel each other's presence once again by the end of the novel. However, whether they manage to reunite and overcome the separation that occurs is left ambiguous. The only way that they would be able to rectify what they once had is if they realised that they are 'not the sinners. You're the sinned against. You were only children. You had no control. You are the victims, not the perpetrators.' ...read more.