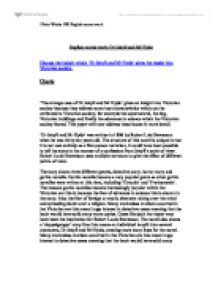 Discuss the insight which 'Dr Jekyll and Mr Hyde' gives the reader into Victorian society.

Gothic novels also centre around secrets such as Jekyll's connection to Hyde, or doppelgangers, a German term referring to people who resemble other characters in strange ways. The monster which Frankenstein made is a doppelganger for the scientist, as Hyde is for Jekyll. Nearly every gothic novel relies on its geography for most of its appeal, they take place in strange eerie locations where the characters find it hard to escape ie Dracula's castle or for 'Dr Jekyll and Mr Hyde' the fog blanketed world of night time London. We read that Mr Utterson has dreams in which he views London as a nightmare landscape through which Hyde stalks committing violence against the innocent. The image of the city as a place with hidden terrors recurs to Mr Utterson but this time he is in the company of the police and is driving to Hyde's room early in the morning. A fog has masked the city seem 'like a district of some city in a nightmare' Stevenson shows great descriptive skill on this passage, here he describes the "great chocolate-coloured pall lowered ...read more.

The audience feared that the drug would take over the human mind as human civilization as a whole. This is another effect which made the book a gripping read. Because the fear of people being to clever and producing drugs which take over the mind this made the book appeal to the Victorian audience resulting in many more sales off the book. With the idea of a single body containing both the knowledgeable Dr. Jekyll and the depraved Mr. Hyde, Stevenson's novel imagines a link between civilization and savagery, good and evil. Jekyll's attraction to the freedom from restraint that Hyde enjoys mirrors Victorian England's secret attraction to the savage non-western cultures. In conclusion the novel shows great insight into the Victorians upper class society we see this in Dr Jekyll's house; as well as upper class society we see a side of the lower class this is shown through Mr Hyde. Also we read about the supernatural horror which taunts the reader, another factor is the fog, this gives the impression of a mask for Mr Hyde's rampages. 1Peter Weeks 10K English course work ...read more.