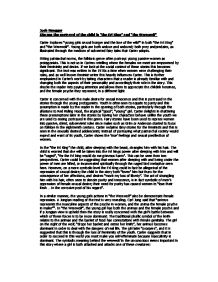 Discuss the portrayal of the child in &quot;the Erl King&quot; and &quot;the Werewolf&quot;

Josh Ruegger Discuss the portrayal of the child in "the Erl King" and "the Werewolf" Carter Explores "young girls sexual hunger and the lure of the wild"a in both "the Erl King" and "the Werewolf". Young girls are both seduce and seduced; both prey and predator, as illustrated through the medium of subverted fairy tales that Carter adopts. Fitting patriarchal norms, the folkloric genre often portrays young passive women as protagonists. This is not so in Carters retelling where the females we meet are empowered by their femininity and desire. If we look at the social context of these stories this becomes significant. The text was written in the 1970s a time when women were challenging their roles, and as well known feminist writer this heavily influences Carter. This is further emphasized in Carter's work by taking characters that a reader is already familiar with and changing both the aspects of their personality and accordingly their role in the story. This shocks the reader into paying attention and allows them to appreciate the childish heroines, and the female psyche they represent, in a different light. ...read more.

This can be seen from two perspectives. Carter could be suggesting that women after sleeping with and being under the power of men are killed, or incarcerated spiritually through the caged bird metaphor seen here. However, on a more symbolic level the Erl King could in fact be allegorical of the repression of sexual desire; the child in the story both "loves" him but fears for the consequence of her affections, and desires "mock my loss of liberty". The act of strangling him with his hair, often seen to denote purity and innocence, is in fact symbolic of men's oppression of female sexual desire; their need for purity has caused women to "lose their flesh ... in the corrosive pool of his regard". In a similar manner, the young girls actions in "the Werewolf" also be demonstrate female repression. A Jungian reading of the text is very revealing. Carl Jung said that "animus represents the masculine aspects of the psyche in women, and the anima the female psyche in males"bi. ...read more.

Alternatively, it refers to your repressed instincts." c Through this means Carter suggests that women's repression of their femininity goes against their self and cause them to go down an undesirable path in their psychological forest. In Carters work she portrays the child very differently to what we expect of a fairytale character, as her tales are not designed to be read to the young, but rather to fit their original purpose of teaching female adolescents of their sexual desires and the pitfalls of the world around them. She focuses on the psychological aspect of her stories keeping them in keeping with a genre traditionally full of the subliminal. It has been suggested that Carters work could viewed by Freud's personal unconsciousness theory, where we are forced to dream in order to deal with the issues around us that are socially repressed in the world we live in. Carter portrays her young children, as the fixings of a woman's mind where by their exploits are in fact a coping mechanism in a world where youth, innocence and the animus are preferred. a From the beast to the blonde: fairy tales and their tellers through the ages b http://mythosandlogos.com/Jung.html c http://dreammoods.com/dreamdictionary/ ?? ?? ?? ?? ...read more.