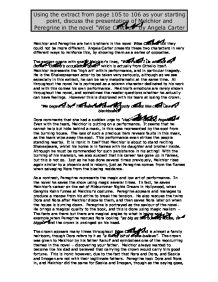 Using the extract from page 105 to 106 as your starting point, discuss the presentation of Melchior and Peregrine in the novel "Wise Children" by Angela Carter Melchior and Peregrine are twin brothers in the novel Wise Children but they could not be more different. Angela Carter presents these two characters in very different ways to reinforce this, by showing them as a series of opposites. The section opens with one of Melchior's lines, "What shall I do without my crown? Othello's occupation gone!" which is actually from Othello itself. Melchior represents the 'high art' within performance, and in particular tragedy. He is the Shakespearean actor to be taken very seriously, although as we see especially in this extract, he can be very melodramatic at the same time. All throughout the novel he is portrayed as a solemn character dedicated to his work and with this comes his own performance. Melchior's emotions are rarely shown throughout the novel, and sometimes the reader questions whether he actually can have feelings. However this is disproved with his tears at losing the crown. "He began to cry. ...read more.

The crown appears many times throughout Wise Children and is almost a family heirloom, though Dora refers to it as "a flimsy bit of make-believe". The crown was given to Melchior by his father Ranulf and symbolises one of the reoccurring themes in the novel - discovering your father. Melchior always wanted to become like his dad and believed that carrying the crown would carry him good fortune. This is ironic however, due to the fact that Nora and Dora, and Saskia and Imogen are not with their legitimate fathers. Peregrine took Dora and Nora in, and Melchior did the same for Saskia and Imogen, though as the saying goes, "it is a wise child that knows it's own father". Dora and Nora are constantly seeking recognition from their biological father, though several times he does not acknowledge this, and even betrays them in public on the set in Hollywood. In this sense, Peregrine is seen as the mother of the two, the caring and considerate one who looks out for the girls. Whereas in contrast, Melchior is the father, concentrated on his career, upstanding and very proud. ...read more.

His first appearance is when Dora describes the kimonos that she and her sister wear on their birthdays, which were given to them by their uncle. She tells us about the colours on the kimonos, another way to categorise Melchior and Peregrine, Melchior and black and white, just as his hair is jet black, and Peregrine as a man of colour and energy, with red hair. To extend this we can say that Melchior is very set in his ways and determined to establish himself with a reputable career - thus his views are black and white, whereas Peregrine is considered the rebel and the son who did 'his own thing'. Dora's uncle also brings in another theme, and yet another contrast between the male twins. Peregrine immigrated to America to make his fortune, whereas Melchior stayed in England - his homeland. This is picked up all throughout the novel, the comparison between the USA and the UK. Peregrine is the traveller and Melchior the one to stay and look into his English roots. It is strange to think that a set of twins could be so different, especially considering the similarities between Dora and Nora, though breaking stereotypes is what Angela Carter set out to do when writing Wise Children and this has been achieved effectively, though subtly. ...read more.