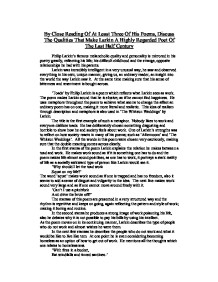 By Close Reading Of At Least Three Of His Poems, Discuss The Qualities That Make Larkin A Highly Regarded Poet Of The Last Half Century Philip Larkin's famous melancholic quality and personality is mirrored in his poetry greatly, reflecting his life; his difficult childhood and the strange, opposite relationships he had with his parents. Larkin was incredibly intelligent in a very unusual way, he saw and observed everything in his own, unique manner, giving us, an ordinary reader, an insight into the world the way Larkin saw it. At the same time making sure that his sense of bitterness and resentment is bought across. 'Toads' by Philip Larkin is a poem which reflects what Larkin sees as work. The poem makes Larkin sound that he is elusive; as if he cannot find happiness. He uses metaphors throughout the poem to achieve what seems to change the affect an ordinary poem has on one, making it more literal and realistic. This idea of realism through description and metaphors is also used in 'The Whitsun Weddings' by Larkin. The title is the first example of such a metaphor. Nobody likes to work and everyone dislikes toads. He has deliberately chosen something disgusting and horrible to show how he and society feels about work. One of Larkin's strengths was to reflect on how society reacts in many of his poems; such as 'Afternoons' and 'The Whitsun Weddings'. ...read more.

'That's the stuff that dreams are made on' After that quote his changes fully, and he realises that work is not the chore that it seems to be on the outside. 'For something sufficiently toad-like Squats in me too,' The poem ends with a concluding stanza, where Larkin becomes aware of the need for balance between the two sides of life; work and spiritual happiness. Through studying this poem I have learnt that Larkin dislikes work yet at the same time he enjoys it. Probably because he knows of nothing else to compare it to which would make it bad. This makes one feel sympathetic towards Larkin as it seems as if he has no happiness in him. 'Toads Revisited' is another poem by Larkin. This poem is more for work whereas 'Toads' is more the against side of the argument. The poem is fairly relaxed and brings out Larkin's more laidback side. In this poem he has reconciled the idea of work and makes himself feel better by describing the people lower than him. The first stanza is an introduction to the poem; Larkin uses direct language to describe where he is and what he is doing. In the next three stanzas he is doing what he does best; describing and observing society as he sees it. ...read more.

Lines like 'And rains begin, and brittle frost Sharpens the bird-abandoned air,' agree on this. The second stanza of the poem is more focused on Larkin himself. It tells how Larkin finds it easier to work in miserable surroundings and that he feels that he does not deserve to be happy. 'Emblems of perfect happiness I can't confront:' Lines like this also show that Larkin feels that he is not able to relate to happiness, possibly linking to his unhappy childhood and his parents' discontented marriage. 'A time less bold, less rich, less clear: An autumn more appropriate.' These last lines of a poem which brings out Larkin's melancholic personality show that he needs bad weather to match his misery. These three poems are all very different yet at the same time also very much the same; they all seem to bring out Larkin's main qualities. He uses his melancholic ways to ensure that his points are bought across in his own way using his talents. One of the most obvious being observing society in an isolationistic way. Mainly, Larkin's problem with society was that he felt he did not fit in, that in a way gave him the perfect way of criticising it from a new and different perspective making his poems so popular. Overall, the way Larkin was bought up influenced his character in such a way that the outcome was incredibly miserable, yet that misery helps us understand and observe the world though his eyes making it deeper and more interesting. ...read more.