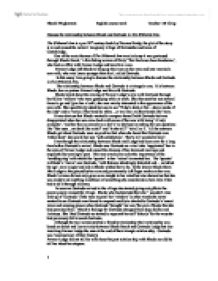 Discuss the relationship between Rhoda and Gertrude in The Withered Arm.

Discuss the relationship between Rhoda and Gertrude in The Withered Arm. The Withered Arm is a pre-20th century book by Thomas Hardy; the plot of the story is in and around the writers' imaginary village of Holmstoke and town of Casterbridge. One of the main themes of The Withered Arm was Jealousy it was portrayed through Rhoda Brook, 'a thin fading woman of thirty' 'that had once been handsome', who had an affair with Farmer Lodge and bore him a son. Farmer Lodge left Rhoda to bring up their son on her own and later married a new wife, who was 'years younger than him', called Gertrude. In this essay I am going to discuss the relationship between Rhoda and Gertrude in The Withered Arm. The relationship between Rhoda and Gertrude is a triangular one. It is between Rhoda, her ex-partner Farmer Lodge and his wife Gertrude. Rhoda heard about the coming of Farmer Lodge's new wife Gertrude through her fellow 'milkers' who were gossiping while at work. She then sent her son several times to go and 'give her a look'; she was mainly interested in the appearance of the new wife. ...read more.

Gertrude revealed to Rhoda the 'marks' on her arm in attempt to 'make it out' as she could not 'remember' how they came about, in one of their 'confidential' conversations. Rhoda began to feel guilty, due to the fact that in the past she had been 'called a witch', isolated from the rest of the village and rejected by Farmer Lodge. She refused to think that it was mere 'coincidence' that blight on Gertrude's arm came on the night of her dream and that it was not 'the exact... limb' she had 'seized in her dream'. Rhoda allowed her self to believe that she exercised a 'malignant power' and was in fact responsible for Gertrude's 'sufferings'. From the way Rhoda felt about Gertrude in the beginning of the story, I would have thought that Rhoda would rejoice on seeing Gertrude's 'shrivelled' arm since it had tarnished Gertrude's beauty and made Farmer Lodge 'love' her 'less' since appearance was important to him, which meant that Rhoda might stand a chance with Farmer Lodge. In contrast Rhoda grew great sadness, her feelings for Gertrude 'amounted' almost 'to affection' and she no longer thought that Gertrude deserved 'any reparation' for Mr Lodge's past conduct to her. ...read more.

Farmer Lodge was the mechanism by which Rhoda and Gertrude's fate were entwined. His affair with Rhoda, her abandonment and the burden of an illegitimate child lead to Rhoda's anger in his new marriage to Gertrude. Unfortunately Rhoda cursed Gertrude and her arm became withered in revenge for Mr Loges past conduct. In fear of loosing Farmer Lodges love, Gertrude resorts to most despicable cure, which led to her death. In The Withered Arm Thomas Hardy used Rhoda's son to start a good relationship between Rhoda Brook and Gertrude. The quirk of fate in the situation is that Rhoda's son, the ill fated boy's life mutually brought Gertrude and Rhoda together in the beginning of the story and his death made them meet again, this time the last, not as friends but as enemies. The boy's carving of the chair instead of helping his mother cook and his poaching, which eventually led to his death were suggestions of his early and tragic death. It seems that as long as the two women were alive their link kept their relationship going whether good or bad, and it was only after Gertrude's death that the relationship between her and Rhoda brook finally came to an end. Nkechi Wagbaranta English course work Teacher: Mr Craig 1 ...read more.