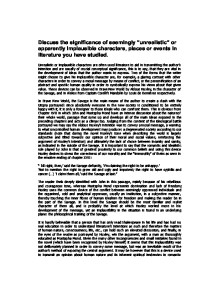 Discuss the significance of seemingly &amp;#147;unrealistic&amp;#148; or apparently implausible characters, places or events in literature you have studied.

Discuss the significance of seemingly "unrealistic" or apparently implausible characters, places or events in literature you have studied. Unrealistic or implausible characters are often used literature to aid in transmitting the author's intention and are usually of crucial conceptual significance, this is to say, that they are vital in the development of ideas that the author wants to express. Two of the forms that the writer might choose to give his implausible character are, for example, a glaring contrast with other characters in order to convey a moral message by means of conflict, or the personification of an abstract and specific human quality in order to symbolically express his views about that given value. These devices can be observed in Brave New World by Aldous Huxley, in the character of the Savage, and in Alekos from Captain Corelli's Mandolin by Louis de Berni�res respectively. In Brave New World, the Savage is the main means of the author to create a clash with the Utopia portrayed: since absolutely everyone in the new society is conditioned to be entirely happy with it, it is only a foreigner to those ideals who can confront them. ...read more.

It may be however that this is a device used to transmit an opinion about human nature and its inherent spiritual tendencies to romantic values and actual morals (as these cannot be genetic or even so mental due to the genetic engineering and the conditioning suffered by the Alphas themselves which are those who show the relative desire for these). Even though the Savage has lacked the sufficient instruction to uphold such a discussion, "human sprit", which is in every case expressed through the mind, (this would be why castes lower than Alphas cannot express this spirit) tells him certain things that are right and wrong which are subsequently the themes of discussion with Mustapha Mond. However this interpretation seems somewhat to forced and does not connect completely well with Huxley's pessimistic view of the future evident in the ending, as the concept of the inherent quality for freedom in human spirit has something of an optimistic connotation. In Captain Corelli's Mandolin, Alekos is a character who is extremely isolated from civilization, both physically and mentally, as his way of thinking, innocent and almost childish, contrasts deeply with that of most of the central people of the novel, military members which are obviously connected to the war, and the whole situation itself. ...read more.

In conclusion, the seemingly unrealistic or implausible characters in the context of each novel do play a crucial role in the development of the ideas the author wants to portray. In the first case, the Savage acts as the ambassador of our proper human passions in the Brave New World so that Huxley's point of view on the conflict presented, the trading of freedom and high art for ignorant bliss, is conveyed properly, using the necessary narrative subjective ness. However small carelessness's in the plot create an involuntary implausibility in this character making it not at all convincing in the underlying levels, yet no less effective in the conceptual clash and further debate, which is the whole point of the novel. In Captain Corelli's Mandolin a much different technique is employed by De Berni�res as we have observed, making of Alekos equally effective in transmitting the authors ideas as John, but doing so in a more artful and thought up way than Huxley through a subtle symbolic representation of the human values behind the author's call to innocence and modesty as the ultimate form of wisdom. ...read more.