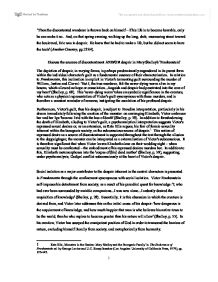 'Then the discontented wanderer is thrown back on himself - if his life is to become bearable, only he can make it so. And, on that spring evening, walking up the long, dark, murmuring street toward the boulevard, Eric was in despair. He knew that he had to make a life, but he did not seem to have the tools' (Another Country, pp.213/4). Discuss the sources of discontentment AND/OR despair in Mary Shelley's 'Frankenstein' The depiction of despair, in varying forms, is perhaps predominantly engendered in its purest form within the individual character's guilt as a fundamental essence of their characterisation. In relation to Frankenstein, this inclination is explicit in Victor's tormenting guilt surrounding the murder of William, Justine and Clerval: 'But I, the true murderer, felt the never-dying worm alive in my bosom, which allowed no hope or consolation...Anguish and despair had penetrated into the core of my heart' (Shelley, p. 68). This 'never-dying worm' takes on symbolic significance in the creature, who acts as a physical representation of Victor's guilt synonymous with these murders, and is therefore a constant reminder of remorse, instigating the escalation of his profound despair. ...read more.

Social isolation as a major contributor to the despair inherent in the central characters is presented in Frankenstein through the confinement synonymous with social isolation. Victor Frankenstein self-imposes his detachment from society, as a result of his parochial quest for knowledge: 'I, who had ever been surrounded by amiable companions...I was now alone...I ardently desired the acquisition of knowledge' (Shelley, p. 28). Essentially, it is this obsession in which the creature is derived from, and Victor later addresses this as the initial cause of his despair: 'how dangerous is the acquirement of knowledge, and how much happier that man is who believes his native town to be the world, than he who aspires to become greater than his nature will allow' (Shelley, p. 35). In his creation, Victor has usurped the omnipotent position of God in order to transcend the barriers of nature, excluding himself literally from society, and metaphorically from humanity. Similarly, the creature's desire to be educated contributes to his sense of social isolation, and by implication existential isolation, which contributes to his melancholy: 'although I eagerly longed to discover myself to the cottagers, I ought not to make the ...read more.

111). The accumulation of these moral and social injustices essentially leads to the creature's 'only link that held [him] to the world' being 'broken' (Shelley, p. 113); he is completely isolated from any sense of community, from humanity, from his creator and from his own self-identity and has therefore relinquished all hope of social assimilation: 'am I not shunned and hated by all mankind? You, my creator, would tear me to pieces...tell me why I should pity man more than he pities me?' (Shelley, p. 119). The creature has no moral stability or a sense of collective identity; he has no defined purpose in life and is completely alienated from all forms of community. In conclusion, through the characterisation of Victor and his monster in Frankenstein, Shelley explores the detrimental effects that social isolation, both self-imposed and socially imposed, together with self-denial and ambiguous or undefined self-identity has on individual expression, self-worth and ultimately the fate of the character. The despair that results from the guilt and isolation presented in conjunction with the central characters is essential to the reader's understanding of the characterisation employed by Shelley, and provides the central platform in which the demise of the characters is explored and understood. ...read more.