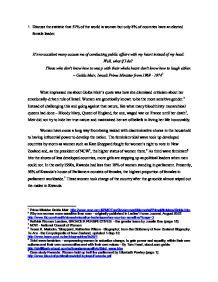 Discuss the statistic that 51% of the world is women but only 8% of countries have an elected female leader.

1. Discuss the statistic that 51% of the world is women but only 8% of countries have an elected female leader. It's no accident many accuse me of conducting public affairs with my heart instead of my head. Well, what if I do? Those who don't know how to weep with their whole heart don't know how to laugh either. ~ Golda Meir, Israeli Prime Minister from 1969 - 19741 What impressed me about Golda Meir's quote was how she dismissed criticism about her emotionally-driven rule of Israel. Women are genetically known to be the more sensitive gender.2 Instead of challenging this and going against that nature, like what many bloodthirsty monarchical queens had done - Bloody Mary, Queen of England, for one, waged war on France until her death3, Meir did not try to hide her true nature and maintained her set of beliefs in living her life honourably. Women have come a long way from being tasked with discriminative chores in the household to having influential power to develop the nation. The feminism tidal wave took up developed countries by storm as women such as Kate Sheppard fought for women's right to vote in New Zealand and, as the president of NCW4, the higher status of women there.5 As third ...read more.

An absence of an appropriate environment for women to join politics, including the lack of funds for elections and campaigns and the inaccessibility to education that makes them unaware of the opportunities available are also challenges for women when they want to take up leadership roles. The truth is that women have to work much harder than men in climbing the political ladder and staying there. Furthermore, social norms and traditionally mindsets are hard to break as society deems women as unable to handle the huge load of stress and responsibility. Hence, there are few elected female leaders in the world, as the very people voting for their leaders are those who have been brought up to think of women as the weaker gender. The thing about disinterest is that women, being more emotional creatures than the logical males, want to pursue a career that suits their meticulous and expressive character. 20% of females are in administrative and secretarial jobs in which attention to details is strongly needed as compared to less than 5% of males in the same sector.12 In the political arena, however, one is expected not to let their emotive feelings affect their judgement in deciding what is best for the country and its people. ...read more.