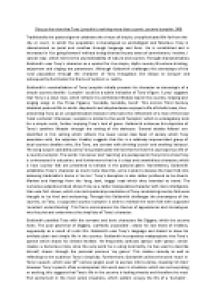 Discuss the view that Tony Lumpkin in &quot;She Stoops to Conquer&quot;is nothing more than a comic country bumpkin.

﻿Discuss the view that Tony Lumpkin is nothing more than a comic country bumpkin. (40) Traditionally the pastoral genre celebrates the virtues of simple, unsophisticated life far from the city or court, in which the population is stereotyped as unintelligent and fatuitous. Tony is characterised as jovial and carefree through language and form. He is uninhibited and is interested in ?fun going forward? without being diverted by any sense of commitment, ?mother, I cannot stay?, which mirrors the unpredictability of nature and country. Through characterisation, Goldsmith uses Tony?s character as a symbol for the simple, idyllic country life where drinking, enjoyment and singing are paramount. Although Goldsmith challenges this stereotype of the rural population through the character of Tony throughout She Stoops to Conquer and subsequently illuminates the theme of opinion vs. reality. Goldsmith?s nominalisation of Tony Lumpkin initially presents his character as stereotypic of a simple country dweller. ?Lumpkin? could be a subtle indication of Tony?s figure. ?Lump? suggests that Tony is a stout man, which reflects his uninhibited lifestyle lead in the country; relaxing and singing songs in the Three Pigeons, ?toroddle, toroddle, toroll?. This mirrors Third Century idealised pastoral life in which shepherds and shepherdesses enjoyed a life of blissful ease, thus presenting Tony as an unsophisticated character who lacks the refinement of a man of the town ?bred a scholar?. ...read more.

The dramatic irony of the situation relays to the audience the comedy and wit of Tony?s conversation. Contrarily, Mrs Hardcastle remains ignorant to the whole ruse, contrasting Tony?s aptitude for the situation, which presents him as superior and separate from the ignorance of the other country dwellers. Goldsmith embellishes this subtle superior presentation of Tony through the utilisation of stage directions. At the alehouse Tony is seated ?a little higher than the rest?, which presents him as having relative authority over the other ?fellows?. Furthermore, his song creates a harmony within the group and unites the men, which Goldsmith shows through the unanimous ?hurrah? said by ?omnes?; Latin for ?all?. Both devices present Tony as a figure resembling a shepherd, protective of his flock. Despite the pastoral connotations this presentation of Tony shows him to have relative power and authority, separating him from the other doric characters and thus suggesting he is more than a comic country bumpkin. Alternatively, Vicki Janik describes Tony as ?the most ignorant of the country bumpkins?. Through Mrs Hardcastle, Goldsmith reveals that Tony isn?t well educated, 'I don?t think a boy wants much learning.? Tony?s lack of education and structure in life; indulged by his doting mother, has resulted in his ?consumptive figure? and his occasional lack of awareness. ...read more.

Furthermore, Tony helps his cousin retrieve her jewels; which are her ?fortune?, so she may leave with Hastings. Tony quickly agrees to ?clap a pair of horses to (their) chaise?, in aid. This generosity demonstrated through the plot to retrieve Constance?s jewels implies that Tony?s character may be more complex than originally believed to be. Similarly, Tony clarifies that he ?want(s) no nearer relationship? with his cousin and therefore Tony?s acceptance to ?assist? Hastings and his proposal to ?whip (Constance) off to France? can be interpreted as a selfish, anti-pastoral act to be rid of Constance. The rural population are seen to be welcoming and sympathetic, rather than narcissistic and under-handed which is how Goldsmith characterises Tony through the nature of this plot, which suggests that Tony is in fact the complete polar opposite of a country bumpkin. Despite the comedic trait of Tony?s character being indisputable, seeing as he is usually at the heart of the farce in this play. Throughout She Stoops to Conquer, Goldsmith clearly opposes the stereotypes of the country folk through the character of Tony Lumpkin. Initially, Tony is seemingly rather plain and peaceful; mimetic of the country, but his character develops throughout the play into a more complicated personality, so much more than a country bumpkin. ...read more.