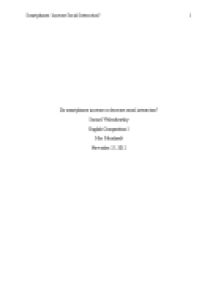 ﻿Smartphones: Increase Social Interaction? Do smartphones increase or decrease social interaction? Samuel Walendowsky English Composition I Mrs. Meinhardt November 25, 2012 Abstract Everyday more smartphones are sold around the world, nowadays there are about of 1 billion of smartphones being used in the entire world. Now it is much easier and faster to share information, experiences, pictures and ideas to everyone. We are getting so used to all of these technologies that soon we won?t be able to live without it anymore. But sometimes people overuse their devices, and this can be very dangerous once you may lose all of your human interaction skills. Do smartphones increase or decrease social interaction? The first smartphone was developed in 1992 by the company IBM and sold by BellSouth Cellular Corp. It was nicknamed, ?Simon,? and had the following features: a calendar, address book, calculator, email service, and a touch screen. They offered Simon for $899 with a two-year service contract and for $1099 without a contract. BellSouth Cellular sold approximately 50.000 units. Following Simon, the company Nokia released the Nokia 900, in 1996. The Nokia 900 was a palmtop computer-style phone combined with a PDA from HP. In the late 90s, people still were used to have a palm top and a cell phone, as the cell phones only had the basic features. ...read more.

Imagine a world that you don?t need to leave your room anymore, you could do whatever you need just using your smartphone, we would lose completely our human interaction. Of course this is an extreme scenario, but we are getting closer to this every single day. I fear the day when technology overlaps our humanity. It will be then that the world will have permanent ensuing generations of idiots (Einstein). Actually, in this quote, Einstein is talking about the atomic bomb, but we can still use this quote to analyze the overuse of smartphones. As the time spent by the users using their smartphones increase more they become dependents of their smartphones. I have to join in the voice of critics who yearn for a simpler, less technical age. It's not that I wish to return to the pre-computer age, of paper and pencil, however. Instead, I'm worried that we risk having our brains become vestigial organs (Whitbourne, 2011). This sentence explains our actual situation, as we use our phones all the time even to do simple things as talk to someone we kind of lose our speaking abilities. Other example is the overuse of the GPS, a very useful tool for when you?ve never been in your destination before. ...read more.

The best solution for this case would be time restrictions determined by their parents, so they get used to don?t use their smartphone during moments like breakfast, lunch, dinner, study time, family celebrations, etc. As far as smart phones are revolutionizing the mode of communication and enhancing the levels of interaction between remote and urban people, they are alienating and limiting people interactions. However, smart phones are helping connect individuals whose relationships are complicated by geography and distance. Despite being of importance uniting distant individuals, smartphones have helped extend the gap between close individuals while increasing distance between them. It is apparent that the coming into force of smart phones has held back oral communication greatly. In my considered opinion, despite bringing with it advanced computing capability, in the ethic aspect, it is not of much importance to get a smartphone. This is because it will help one distant him/herself from close persons. Yes, smartphones come with many benefits that can be used as a library, it can multitask etc. but it can influence your social life negatively. Having said that, because technology explosion cannot be controlled, individuals need to acquire these new gadgets but not let their lives be controlled fully by these objects. Let them control the use of these smartphones to be able to interact with their friends and colleagues freely. ...read more.