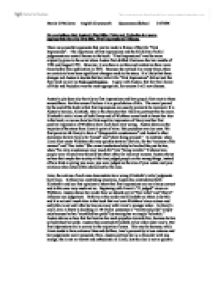 Do you believe that Austen's final title; Pride and Prejudice is a more appropriate than the first title, First Impressions? Discuss.

Do you believe that Austen's final title; Pride and Prejudice is a more appropriate than the first title, First Impressions? Discuss. There are powerful arguments that can be made in favour of the title "First Impressions". The importance of first impressions and the fallibility of initial judgements are central themes in the book. "First Impressions" was the name originally given to the novel when Austen first drafted it between the late months of 1796 and August 1797. However, it was then re-written and worked on three more times before final publication in 1813. Because she revised it so many times, there are certain to have been significant changes made to the story. It is likely that these changes led Austen to decide that her initial title "First Impressions" did not suit the final book as well as Pride and Prejudice. I agree with Austen, that her final choice of Pride and Prejudice was the most appropriate, for reasons I will now discuss. Austen's plot does rely heavily on first impressions and how people first react to those around them. For this reason I believe it is a good choice of title. The moral proved by the end of the book is that first impressions are usually proved to be incorrect. It is Austen's heroine, Elizabeth, who is the character that I believe portrays this the most. Elizabeth's initial views of both Darcy and of Wickham come back to haunt her later in the book, as we see how her first negative impression of Darcy and her first positive impression of Wickham have each been very wrong. Austen shows us the majority of the story from Lizzie's point of view. Her prejudices are also ours. We first perceive Mr.Darcy to have a "disagreeable countenance" and Austen's other characters believe him to be "proud" and "above being pleased." In contrast, when Lizzie first meets Wickham she very quickly starts to like him, for the "easiness of his manner" and "fine looks." ...read more.

Through out Austen uses language to show the immense opposites of what will make Lizzie and Charlotte content. Austen uses words such as "passion" to show the contrasting feeling of desire and love, she makes this situation rather ironic buy marrying Charlotte to Mr. Collins, a man whom we perceive to have "pride" for all the wrong reasons. Even though Charlotte has professed she can only stand "pride" in situations the individual has "a right to be proud." Thus showing that Charlotte possesses little pride and is happy to settle for what she can get. Austen also uses her to present others pride and give a contradicting view to Elizabeth's views on pride. Austen uses structural trepidation in the chapters following Lizzie's refusal of Mr Collins, we see him immediately make the tip to "Lucas Lodge" and soon after we hear he is now "engaged to Charlotte." The Bennet family reactions are to this news are shown in the 20 and then again in chapter 22. But the order which Austen chooses to present her chapters keep her reader in suspense about the full details and credibility of this information, because at first hearing, we like Lizzie are doubtful of this being "entirely true." She has a chapter in-between, twenty one, where we hear of My Bingly's "departure from Netherfield" and this structure means she has her reader eager to read on and find out the full details and extent of the Collins/Lucas relationship. Thirdly, a point often overlooked by many readers is the pride one may possess about a relation or friend for example to be proud to know a person, or to have pride in watching another develop. There are examples of this throughout Austen's novel. The most poignant I believe to be the pride Mr. and Mrs Bennet have for their daughters, in particular Lizzie and Jane. Austen shows us that Mrs. ...read more.

By doing this Austen creates a realistic character in a real situation for her reader, someone they can easily empathise with, as nobody is perfect. The novel shows that every person posses some pride and some prejudice no matter how hard they try not to. Austen uses the fact that her novel was published in three separate books to her advantage. Although today the book is generally sold as one, then she was given the opportunity of creating suspense for the reader. The each part of the novel was on shelves with a few months in between, so for example at the end of the first book, the reader with be in anticipation about the imminent arrival at Permberly. This means she can then use this to her benefit and leave her reader in suspense right up until the last moment on what the "handsome, stone building" look like. So she has used the structure of her book to add to the effect of her character Lizzie finally meeting the "proud" Mr. Darcy's House. Finally, the last reason why I believe Pride and Prejudice to be a superior title, is its effect grammatically and when pronounced compared to "First Impressions". The two words are bold nouns, dictating strength as well as depth. They form a title which is easy to pronounce. It also has the repetition and alliteration to grab a reader's attention. Austen did this with another of her books Sense and Sensibility. For example the title could have been Pride and Judgement and still highlighted the main themes, but would not have had quite the same ring. While first impressions are an important theme in the book, at its heart is the inter-relationship of pride with prejudice and for this reason I believe the final title was the best choice and Austen made the right decision. ?? ?? ?? ?? Harriet O'Halloran English Coursework Queenswood School 25/10/06 ...read more.