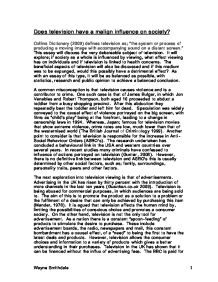 Does television have a malign influence on society?

Does television have a malign influence on society? Collins Dictionary (2009) defines television as; "the system or process of producing a moving image with accompanying sound on a distant screen." This essay will discuss the very debateable subject of television. It will explore; if society as a whole is influenced by viewing, what effect viewing has on individuals and if television is linked to health concerns. The beneficial aspects of television will also be discussed and if this medium was to be expunged, would this possibly have a detrimental effect? As with an essay of this type, it will be as balanced as possible, with statistics, research and public opinion to achieve a balanced conclusion. A common misconception is that television causes violence and is a contributor to crime. One such case is that of James Bulger, in which Jon Venables and Robert Thompson, both aged 10 proceeded to abduct a toddler from a busy shopping precinct. After this abduction they repeatedly beat the toddler and left him for dead. Speculation was widely conveyed to the causal effect of violence portrayed on the big screen, with films as "child's play" being at the forefront, leading to a change in censorship laws in 1994. Whereas, Japan; famous for television movies that show extreme violence, crime rates are low, much lower than that of the westernised world (The British Journal of Criminology 1999). Another point to consider is that television is responsible for the increase in Anti-Social Behaviour Orders (ASBO's). ...read more.

Most television programs have the purpose of entertaining the viewer only; which extends to the multitude of films for the deliverance of commercial intent with little actual cultural value. From a religious perspective, television is seen as a temple of mass production, creating shallow values and stereotypes that influence modern society. Television is a form of stimulus only, with the need to experience feelings and emotions in the content consumed, causing an imbalance in serotonin levels. As stated by Dr Dimitri Christakis, 'television can cause the developing mind to experience unnatural levels of stimulation' (The Elephant in the living room, 2007). This "Hollywood" model of producing programming for entertainment purposes can only produce a society of negative values and views, losing regional traditions and diversity for ratings. Contrary to this, there are now more scientific and cultural programs available since the introduction of digital television. People have access to channels that now cater for almost any interest, giving new educational opportunities for society. Information in this medium encourages the individual to participate in society, keeping them informed with current affairs and politics. Certain programs allow viewers to establish closer links between politicians and electors, resulting in a more unified society. Self-expression and more opportunities are fashioned through the medium of television allowing a more "open" society, allowing the viewer to express their own thoughts and ideas. Moreover, with the introduction of interactive digital viewing this ensues opportunities for society in the future. A contradictory argument, but also a valid point is that television viewing constricts time resulting in an unfulfilled life. ...read more.

This should include the problems that nations face through visceral images that represent the reality of events honestly, being the first step to solving them. Television programmes can be a source for entertainment and positive emotional reactions. Certain programs allow laughter and happiness to be expelled as a family, an individual or with friends. Many positive emotions can be shared with a variety of genres readily available to watch, this can include; television shows, comedies, musical channels and the list is virtually endless. This form of relaxation enables society to experience positive emotions, even if this is possibly only in the short term to assist in taking their minds off their troubles. To conclude, television has varying amounts of evidence in support of it having an influence on society. From the evidence provided it shows that it seems to have an almost overwhelming case that this is a malign influence. However, none of the evidence is universally accepted and research has proven only that more research is needed to give a more definitive answer. This inconclusive evidence is the reason that television is commissioned to still broadcast material. Although, information is limited by the production companies, it is proven to be a resourceful tool for education. Television can unite families together in laughter and produce a topic for discussion, while at the same time bringing a nation together for a common interest. The educational benefits, social benefits and financial gain is the reason why television has not been removed completely, regardless of the controversial arguments against the usefulness of this medium. Additionally, this brings to question the ethics behind television broadcasting and content. ...read more.